The Cherry Groce memorial is due to be delivered to Windrush Square in Brixton from 9am on Wednesday (March 17).

Lambeth council and The Cherry Groce Foundation said today that installation is under way and the memorial pavilion is due to be unveiled at the end of April.

It is designed by the world-renowned architect Sir David Adjaye, whose company Adjaye Associates is responsible for the design of the controversial 20-storey tower in a development on Pope’s Road and Brixton Station Road.

The pavilion will commemorate the life of Cherry Groce, the innocent mother who was shot by a Metropolitan Police officer in her home in 1985.

The council and foundation said that the memorial “will act as a beacon of hope in the pursuit of equality, justice and truth”.

Installation in Windrush Square has been organised and funded by Lambeth council in partnership with the Groce family and Adjaye Associates and has received significant contributions from both the local business community and the public at large.

Cherry Groce was shot in front of her children at her home in Brixton’s Normandy Road and was left paralysed by the attack, suffering ill health and needing decades of care from her family before she died of complications from her injuries in April 2011.

At the time, the police shooting sparked the 1985 uprising against institutional racism in Lambeth which resulted in the death of David Hodge, a young photographer. The Metropolitan police force eventually issued an apology for their actions in 2014.

Cherry Groce’s son Lee Lawrence has written movingly about the shooting and the impact of the police action on his life, on his mother’s life and on the whole community. He won the Costa biography award in January this year for the memoir, The Louder I Will Sing. See our interview with Lee Lawrence about his book.

He said today: “The injustice done to my mother on 28 September 1985 and its aftermath, catalysed our community to act together relentlessly and persistently in the pursuit of justice for more than three decades.

“Our achievements together in that effort can inspire us to continue to work together to make justice a reality across our society.”

Sir David Adjaye said: “The construction of this memorial will speak to restorative justice and will symbolise that what matters to the community, matters to London and the whole world. This tragedy went too long in the public realm without acknowledgement and there is now renewed urgency and importance in finally facing this history.”

Lambeth council leader Jack Hopkins said: “We are proud to be working alongside the Groce family and Sir David on this fitting memorial to Cherry Groce, an innocent woman from our borough who experienced terrible suffering as a result of a major injustice.

“We hail the Groce family for their commitment in getting to the truth of Cherry’s shooting, for their resilience in the face of suffering and for their determination to create a long-lasting tribute to their mum which will make sure this injustice will not be forgotten.”

The Cherry Groce Memorial is scheduled to be unveiled officially in Windrush Square with a ribbon-cutting ceremony at the end of April to coincide with the 10th anniversary of the passing of Cherry Groce.

New Lambeth waste contractor Serco bailed out by another authority 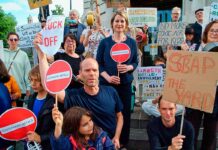 Brixton Immortals domino club and Brixton Soup Kitchen are celebrating Jamaica independence day on Saturday (7 August) with a family day in the garden...

Juliet and Romeo in Streatham