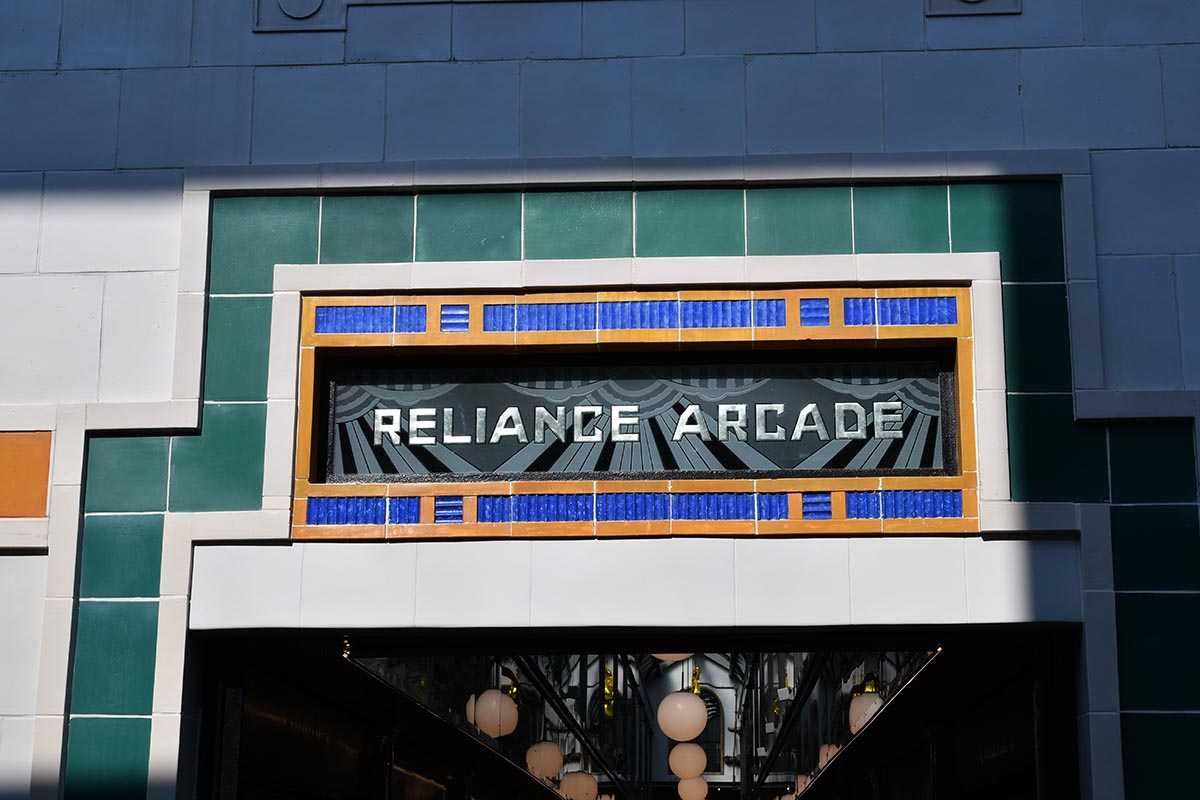 Reliance Arcade was built onto an existing Georgian house between 1923 and 1925, in the Art Deco style. The Electric Lane frontage is a rare surviving example of Egyptian-inspired terracotta architecture which was briefly in fashion following the spectacular discovery of Tutankhamun’s tomb in 1922.

The arcade, which houses 27 small businesses across 40 units, was on Historic England’s Heritage at Risk Register due to its deteriorating condition. The funding secured from the National Lottery Heritage Fund as part of the wider Brixton Townscape Heritage Initiative made the much-needed renovations possible to bring this special building back to its former glory. 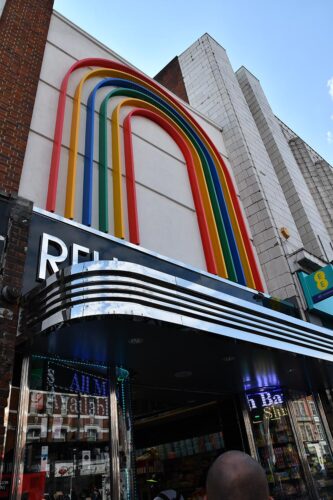 The work started in April 2019 and was completed by April 2020. It includes comprehensive repair of the building including a new glazed roof, repairs to the slate roof of the Georgian house, removing out of character later additions and restoring original features. Those included more than 340 metres of custom-made stainless-steel trim, replacing all the glazing to the upper storage areas to make it safe, piecing in new black glass where the original was damaged or missing, repairing the Egyptian façade and glass sign, installinga new canopy and shopfronts on Brixton Road to match the Art Deco style and creating a new rainbow entrance feature.

The Egyptian entrance is one of only half a dozen surviving buildings in an Egyptian style built in London between the two World Wars according to Chris Elliott, author of ‘Egypt in England’. 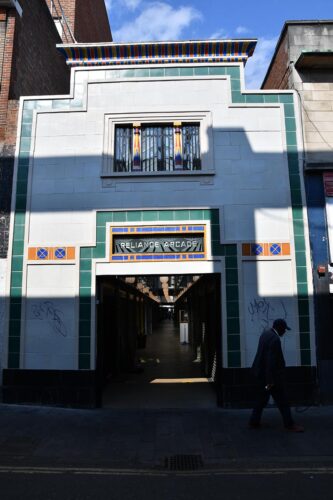 Chris Elliott writes about the Reliance Arcade entrance, “Some key elements that Egyptian style buildings borrow from the temples of Egypt are the very distinctive overhanging border around the tops of walls and over entrance-ways (known as a cavetto cornice), columns imitating papyrus, palms, or lotus plants, and their colourful decoration. All three of these are present in the Reliance Arcade entrance. Its shape even echoes that of temple entrances, or pylons, but without their distinctive sloped sides, which are difficult to include in terraced buildings, but can be suggested by mouldings. The bright colours on the roof cornice, columns, and some of the other decorative terracotta elements, produced by Shaws of Darwen, were painted on after the terracotta casting, perhaps for cost reasons.”

The Heritage of London Trust with support from Mischon de Reya contributed to the restoration of the Egyptian façade of Reliance Arcade as part of the larger renovation project, bringing the faded and run-down entrance back to life. 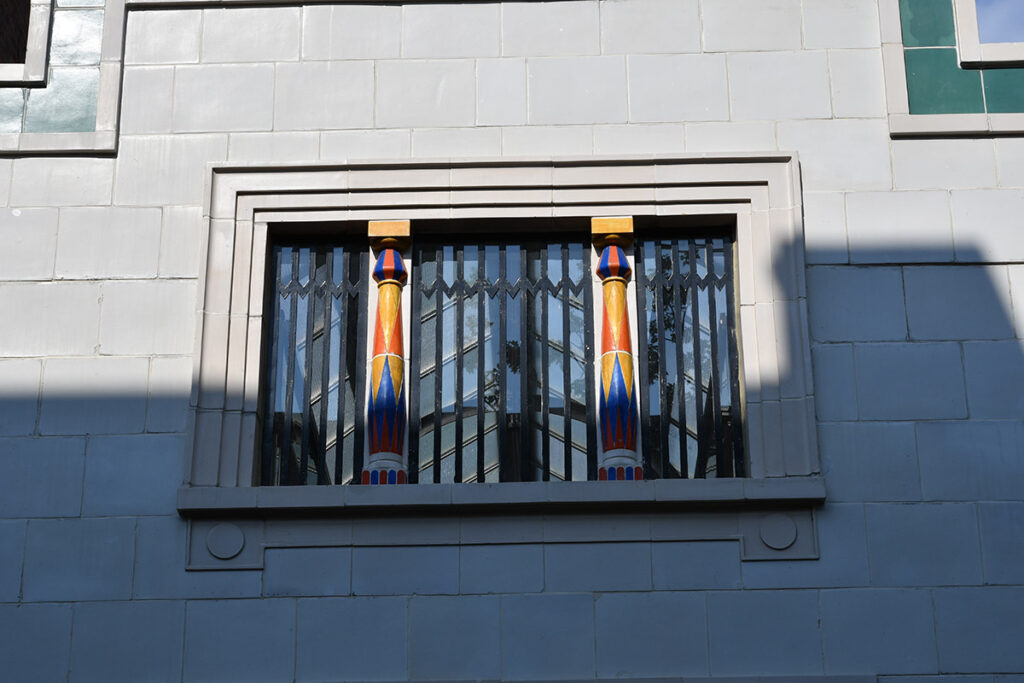 Conservation specialists Hugh Cullum Architects managed the works, restoring the Brixton Road entrance by installing shopfronts and a new canopy, as well as internal works. Malcom Pritchard of Hugh Cullum Architects states, “Internally, we sought to return the Arcade to its original 1930s appearance while bringing it up to modern building standards.” As with any restoration project the architects faced some challenges along the way, “In this type of project, we always try to make repairs on a like-for-like basis; however, sometimes it’s not always possible. One example would be the Vitrolite glass that would’ve originally made up the fascias and soffits within the arcade but is simply no longer manufactured. We worked with a local Brixton glazier who was able to make a fair approximation of the original Vitrolite instead.” 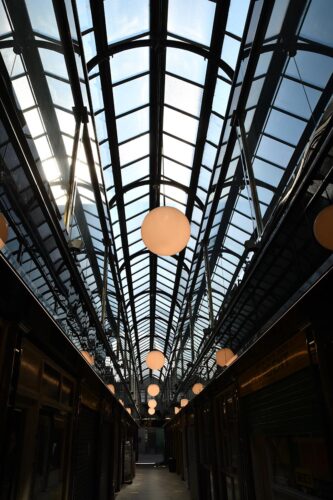 The restored glass roof allows the narrow alleyway of shops to glow as it reflects off the smoky mirrored glass interior. Pritchard says “We love the effect of the light on the clear lacquered steel structure of the original 1930s standard patent glazed roof lights reflecting off the glass to the shops’ first-floor storage areas.”

The restoration of Reliance Arcade is as much about preserving cultural heritage as it is about architectural heritage. Pritchard comments “Brixton Townscape Heritage Initiative has allowed the repair and renovation of a critically endangered building that without help would never have been saved. Reliance Arcade is home to a variety of small independent traders who are so closely linked to what makes Brixton a unique part of London.”

The restored Reliance Arcade is a bright and colourful gem in Brixton’s architectural landscape – a unique Art Deco arcade that provides a home for small independent businesses right in the heart of Brixton.

Tests show ‘no spread’ of Covid variant in Lambeth