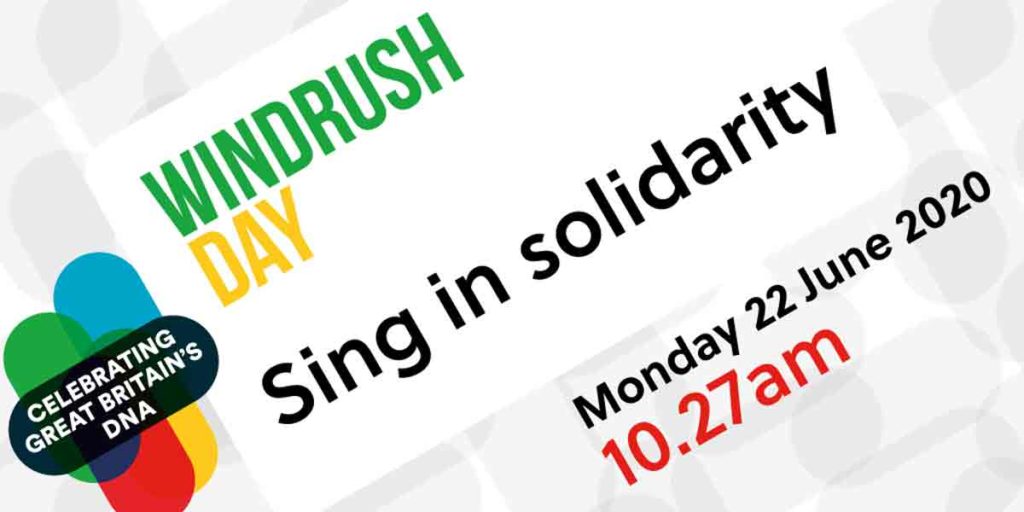 Lambeth residents are invited to join in a borough-wide door-step mass singing of Desmond Dekker and the Aces’ You Can Get It If You Really Want in a new and social-distancing-friendly Windrush Day 2020 celebration on 22 June.

Colourful Radio will be broadcasting a new recording of the song, and Lambeth council is encouraging all residents to tune in and join in.

A Windrush art and activities pack, created by Brixton-based artist Carolyne Hill, will support the celebration. It contains a motif which features on posters for people, businesses and other organisations to decorate and then put in windows, on front doors and in gardens. Windrush bunting for people to decorate and display is also available.

Lyrics of the song and artwork can be downloaded from love.lambeth.gov.uk/windrushday.

This year’s Windrush celebration was developed during lockdown and inspired by the weekly Clap for Carers, as well as the huge contribution members of the Windrush Generation and their descendants have made in the battle against the coronavirus – often at great personal cost.

Lambeth council and the Brixton Project (formerly Brixton Design Trail) have worked with local musicians to create the new recording of You Can Get It If You Really Want for residents to sing along to from their door step, front garden or window on Monday, June 22 at 10:27am – which is a reference to the 1,027 passengers aboard the Windrush when it docked at the port of Tilbury in East London on 22 June 1948.

“I want everyone – radio stations, businesses, schools and shops to play this song and join in on 22 June at 10:27am.

“This celebration has added significance at a time when the Black Lives Matter campaign has, once again, placed the spotlight on the racist and despicable treatment experienced by the Windrush Generation under the hostile environment policy which destroyed many Black people’s lives.”

The council is to audit all landmarks, statues and works of art in public spaces in Lambeth for links to slavery, colonialism and the oppression of Black and minority ethnic communities.

Results of the audit will be the subject of a community consultation so that the council can work with local communities on “what we choose to commemorate as a community”.

Cllr Winifred said the Windrush Day celebration had been designed “as an antidote to discrimination, highlighting the legacy of the Windrush Generation whose Caribbean culture and traditions have been hugely influential on British culture, and are now reflected throughout the UK in music, food and fashion.

“This year we also faced the Covid-19 pandemic which has again illustrated how ill-placed discrimination against Black people has been, and how the Windrush Generation is a group of people who keep giving for Britain – with many members working on the frontline of this crisis, in hospitals, on public transport and in care services, helping save lives and looking after those who are most at risk.

“The Windrush Generation have made a tremendous contribution to British life and that has never been more evident or important to celebrate than now.”

Jamaican-born Desmond Dekker released You Can Get It If You Really Want, which was written by Jimmy Cliff, in 1970 when it reached number two in the UK charts. Dekker, who later lived in South London and died in 2006, is buried in Streatham Park Cemetery.

The council said the song had been chosen in discussion with members of the community “because it is uplifting, fun to join in singing, encourages people to dance and is instantly recognisable”.

The song featured in the 1972 film The Harder They Come, which was an enormous hit in Jamaica and in Black communities in the UK, with its cast playing ordinary Black people speaking Patois. It was shown in Brixton at the Ace Cinema, now Electric Brixton, soon after its international release.

Cllr Winifred’s full statement, including details of the audit of local landmarks for links with slavery