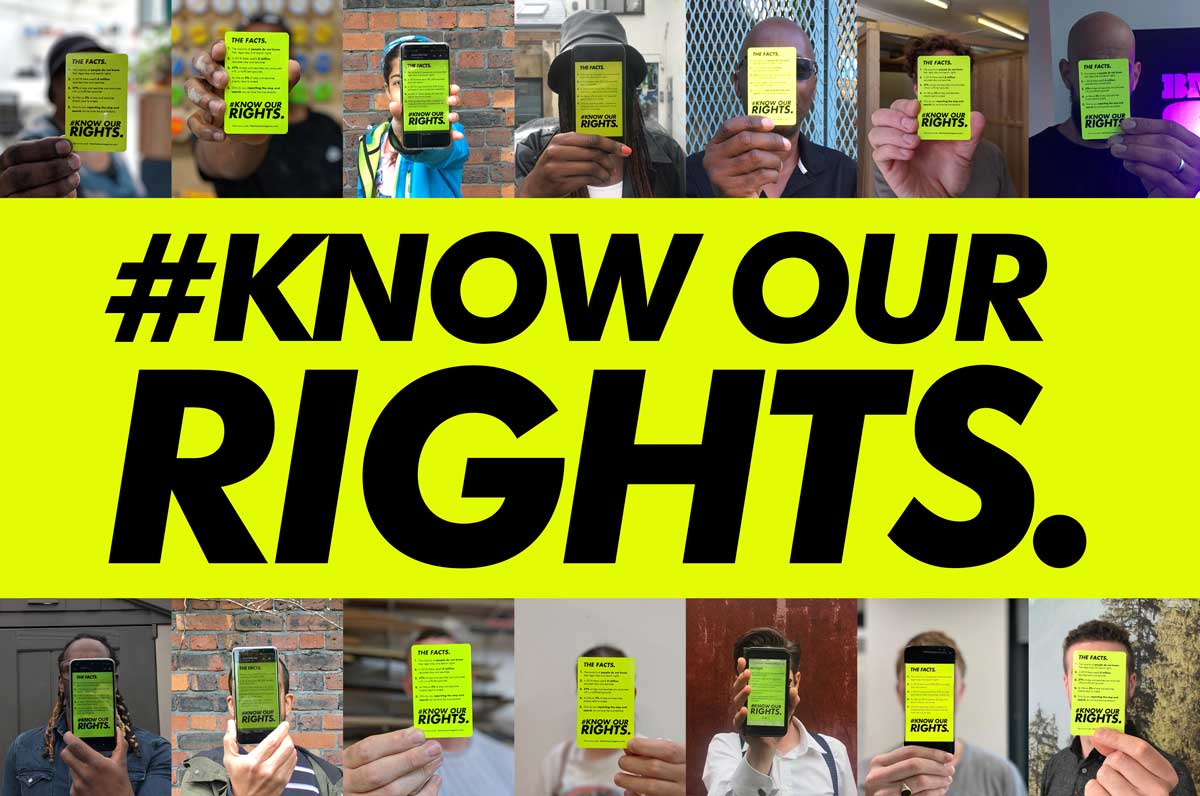 The Champion Agency, a longstanding Brixton institution, explains why it has launched  #KnowOurRights, a campaign to arm people with their stop and search rights. It’s a topic close to Brixton’s heart

You may have seen the campaign to recruit 20,000 new police officers, or that £10m worth of additional taser guns have just been ordered? This, coupled with the recent approval to further relax stop and search laws, means it is important that we ALL #KnowOurRights (we quite quickly realised that most of us do not). 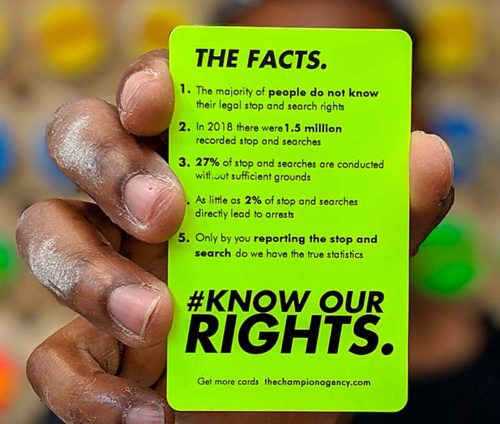 Champion and partners have done all the legal legwork and created a brightly coloured, wallet-size card available both virtually and physically that bullet points all five of Our Rights in simple, plain language.

Right now, we need YOUR help getting OUR RIGHTS in front of as many people as possible. Our goal is for 1% of the English and Welsh population (Scottish law is different …) to #KnowOurRights.

THE PICTURE TO DATE

This year the government announced changes designed to make it easier for the police forces worst affected by violent crime to use their stop and search powers.

Removing the safeguards introduced under the Best use of Stop and Search Scheme by the home secretary, Theresa May in 2014, current prime minister, Boris John and home secretary, Priti Patel have recently made the decision to extend stop and search powers under section 60 of the Criminal Justice and Public Order Act 1994.

Known as “section 60 searches”, a stop and search can take place without reasonable suspicion if there is a belief that serious violence will occur in a specified area, or that people are carrying offensive weapons.

Police forces across England and Wales will soon be able to carry out searches in designated areas without authorisation from a senior officer.

With an increase in the number of police officers set to hit our streets, and the Government’s changes to Section 60 many have been left wondering what this all means.

SO WHAT DOES IT MEAN?

Today’s government has backed the authorisation of enhanced stop and search powers as part of its approach to tackling knife crime. The changes will result in at least 3,000 more officers being able to authorise section 60 searches, with London’s Metropolitan Police increasing the use of stop and search in 2019 as part of its response to an increase in knife violence.

Research suggests that the use of stop and search has a marginal impact on crime reduction, with any marginal benefits likely to be outweighed by negative impacts on police community relations.

The Equality and Human Rights Commission have noted that: the experience of being unfairly targeted for stop and search undermines the legitimacy of policing which, in turn, has material effects on the willingness of victims of crime and witnesses to pass information to the police and voluntary compliance with the law.

Case law has established that a stop and search that has not been conducted in line with legislation and guidance can be rendered incompatible with human rights legislation.

The ‘Our Rights’ Campaign was launched to protect the basic human rights of English and Welsh citizens by providing them with the legal information needed should they find themselves in a stop and search situation.

Stop-Watch: “You can never be too clued up on knowing your rights! Having even a basic knowledge of stop and search rights enables you to understand when policing powers are being misused or abused.”

Flex Legal: “Only 1 in 10 people seek legal advice from a solicitor when faced with a legal issue. In the end they often fail to get justice, either through not understanding their rights or finding it too intimidating and expensive to enforce them. By producing these cards Champion is helping to overcome part of this by empowering those who might be in a difficult situation with an inherent imbalance in power, to have a handy reference so they clearly know and are able to assert their rights.”

Barrister Amanda Clift-Matthews: “Police stop and search powers are an essential tool when it comes to combating crime, but just as critical is that people understand what is and what is not acceptable in order to reduce the risk of these powers being abused.

“The number of stop and search incidents increased dramatically during the late 2000s, reaching a peak of over 1.5 million in 2008/09 and leading to a growing concern that the police were not using stop and search effectively.

“Overall, research has shown that there is limited evidence to support the notion that stop and search tactics have a deterrent effect on overall crime statistics. The Home Office reported that the arrest rate as a direct result of recorded section 60 searches was as low as 2% between April 2017 and March 2018.” 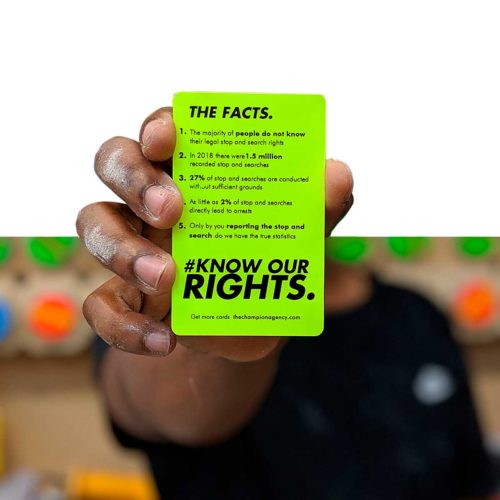 1The majority of people do not know their legal stop and search rights.

3In 2013 it was found that 27% of stop and search events were conducted unlawfully.

4As little as 2% of section 60 stop and search events lead to an arrest.

5Only by reporting unfair, unlawful or inappropriate stop and search do we have the full picture.