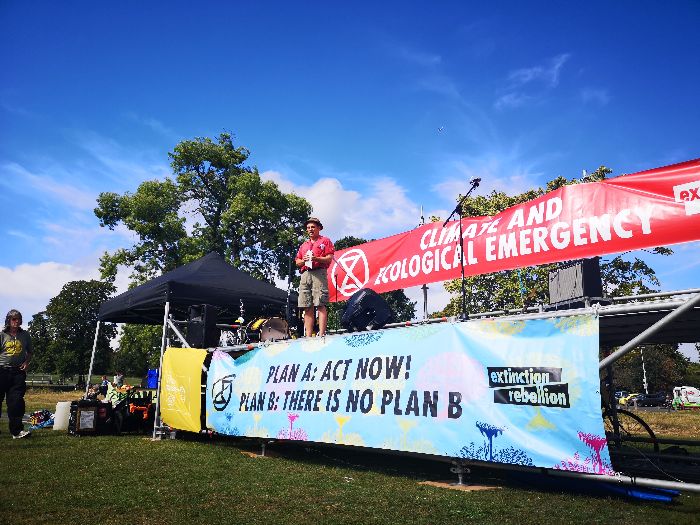 Mark Rylance at the recent Extinction Rebellion event in Brockwell ParkOscar and BAFTA award-winning actor Mark Rylance will tomorrow (14 September) read a “declaration of rebellion” against the government on the steps of Lambeth Town Hall in Brixton.

The actor, who is also a locally based environment campaigner, will join members of Extinction Rebellion and read the declaration at noon.

Extinction Rebellion – one of the fastest growing movements in British history – is calling on the UK government  and others to take immediate radical action. Almost 1,000 people have joined the Rebellion campaign in Lambeth.

Rylance – who won a best supporting actor Oscar in 2016 for his role in Bridge of Spies – resigned from the Royal Shakespeare Company earlier this year in protest at its ongoing sponsorship by oil giant BP.

“In October, Extinction Rebellion will once again rise up in London, demanding that the government makes the climate crisis its top priority,” said Rylance.

“At town halls across the country, rebels like me are coming together to reaffirm our sacred duty to rebel against government inaction.”

The declaration of rebellion is a call to arms for campaigners, insisting that: “We refuse to bequeath a dying planet to future generations by failing to act now”.