Artist Denzil Forrester was in Brixton today (19 September) to launch Brixton Blue, the new Tube Station mural that will be on show for a year.

Commissioned by Transport for London (TfL), his giant creation is the latest version of his 1982 work, Three Wicked Men, now in the Tate Gallery, that was inspired by the death in police custody of his friend Winston Rose. 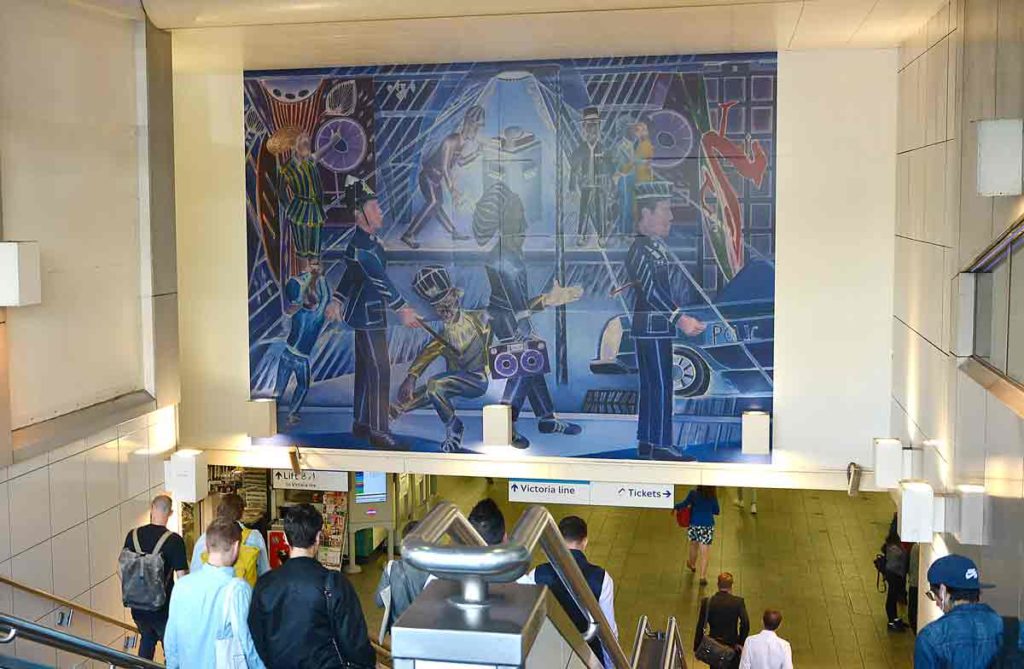 Brixton Blue adds new elements to Three Wicked Men – sound systems, a DJ, and a child capturing the scene with a smartphone.

It is the first major UK public commission for the Grenada-born artist whose current recognition comes after decades of work all over London.

For 30 years he taught at South London’s Morley College, and was based for many years at Islington Art Factory.

While he is now an artist in demand – he was being filmed for a documentary in Brixton today – his path to fame has not been quick or straight.

For some time he had to store his giant works in a shed in Stoke Newington belonging to his family after he was dismissed by the Islington Art Factory. He won a judgement at an employment tribunal against the factory, but could not return.

Now living in Truro, Cornwall, he has had recent exhibitions in London and New York (where he lived for two years in the eighties thanks to a scholarship) and is the subject of a book published to coincide with the London exhibition.

The Tube mural is part of TfL’s 2019 Art on the Underground programme that looks at the role artists can play in developing ideas of togetherness and belonging.

Earlier this year Denzil Forrester’s work was on show at Brixton’s 198 Contemporary Arts and Learning on Railton Road.

The exhibition saw the launch of a film, Denzil’s Dance, directed by Julian Henriques of London, Goldsmiths College.

In it, Denzil Forrester visits Jamaica for the first time to use his “gesture drawing” technique, inspired by Kimon Nicolaides’ book The Natural Way to Draw, to express the musical performance of the sound system session as a composition of texture, colour, light, line and perspective.

“Music and dance were, and still are, my main sources of inspiration,” says Denzil Forrester.

“I was lucky to be in Hackney at the right time – the 80s. I had access to all the major dub blues nightclubs – Phebes, All Nations and Four Aces.

“For the very ﬁrst time I was in a big space with dub reggae playing at maximum volume, it was a piece of heaven on earth.

“I began to take my sketchbook, A1 paper and drawing equipment and draw. It was dark and smoky. I didn’t care what the people looked like — I just wanted to draw movement, action and expression.

“I was interested in the feeling and energy of the crowd.

“Particular dance movements and clothing play an important part in my gesture drawings. In these clubs, city life is recreated in essence – sounds, lights, police sirens, bodies pushing and swaying back and forth and all in a smoke-ﬁlled room. Sometimes the atmosphere was momentarily broken by another group of people, dressed only in blue.

“Music has a way of uniting people. We all need that adrenaline shot now and then to wake us up and bring us together. Unfortunately, lots of these places are disappearing – Four Aces is now luxury flats.

“My paintings haven’t been seen much by the general public, this is a golden opportunity for a fast moving audience to see my work on a massive scale.

“Art on the Underground is reaching out to all, helping to make visual art more accessible to the public.”

Eleanor Pinfield, head of Art on the Underground, said the new work is reaching back to the past, from a time when many of the original 1980s Brixton murals were commissioned.

“Brixton Blue engages with the diverse reality of London and its alternative scenes whilst referencing complex histories of injustice.”

Known for his vibrantly coloured works of dancehall scenes, Denzil Forrester says that as he painted Brixton Blue, “it just got darker”.

Denzil Forrester talks about his work