It’s a sunny Wednesday morning in Brixton and a momentous day for the 48 people who are about to be “conferred with the honour of British citizenship”. It’s a touching ceremony that combines the arcane with a thoroughly modern concept of citizenship.

The new citizens are welcomed by Lambeth Mayor Christopher Wellbelove on behalf of the government of Queen Elizabeth II and Lambeth council and have to swear or affirm allegiance to the Queen “her heirs and successors according to the law”.

For those present this is the final step to becoming a British citizen. Taking part were Europeans who have settled here but whose future is uncertain as a result of Brexit. They were joined by Africans, Asians, New Zealanders, Australians and Brazilians,

One of those receiving citizenship told the mayor it was a relief, “I’m so happy now I’ve got that security.”

They are as diverse a group as the Lambeth citizens they are about to join. 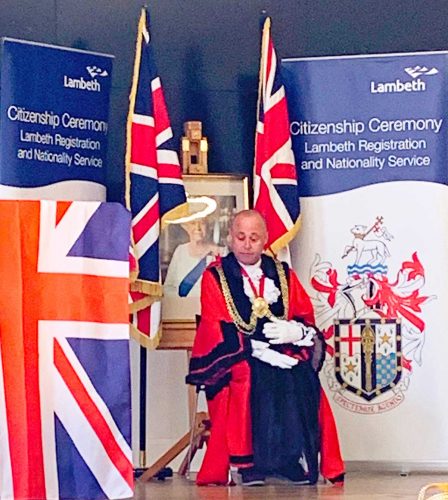 Mayor Christopher Wellbelove has presided over citizenship ceremonies at a rate of one a week. That equates roughly to 2,500 new citizens.

He welcomed the new citizens to a borough with a rich history. “Today you become part of that history. The fact that so many different people, cultures, languages and views can live in one place is our greatest strength. In the modern world and challenges we face as individuals we must live together, supporting one another.”

Many well-known actors, writers poets, musicians and politicians have lived and worked in Lambeth. Charlie Chaplin, William Blake, John Major and David Bowie started from humble beginnings in our borough.

“Lambeth is renowned for welcoming new communities. It was the destination of choice of the Windrush generation and more recently has welcomed Polish Portuguese and Somali peoples.

“I’m very proud to be mayor of such a welcoming borough and now welcome you. You bring new experiences and energy that will help shape a brighter future for us all.

“Lambeth, the borough of which I am very proud to be mayor, is founded on shared values – freedom of speech, tolerance, respect of others, active participation in community life and commitment to equality of opportunity for all.

“Today it is my honour to welcome you officially to our borough and to the UK as formal and equal citizens. May you and your family flourish.”

Wellbelove; who is about to stand down as mayor; says he has loved doing the citizenship ceremonies. It’s part of a tradition of welcoming people that he’s proud of.

The other thing he is most proud of is the work he has been able to do during his year in office to support his chosen mental health charity, Mosaic, which is based in Brixton.

‘Brixton has such an incredible spirit’ – Beyond Retro boss on...

With a month’s worth of rain due to fall today (18 June), it may not be the best time to announce a season of...