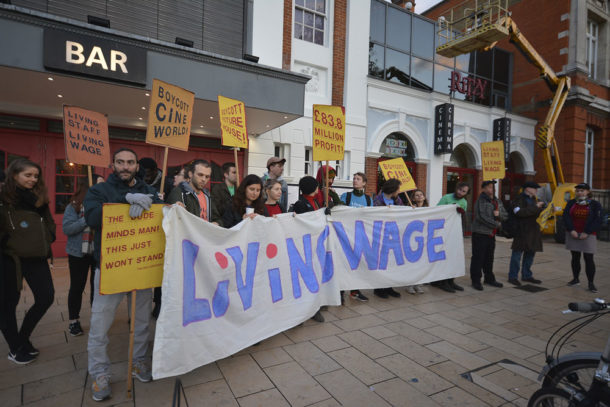 A former Brixton Ritzy cinema worker, sacked for her trade union activities in support of the Living Wage, has won a victory with major legal implications for all union campaigners.

The latest tribunal ruled that Kelly Rogers was unlawfully sacked for her trade union activities and that the sacking breached her human rights of “freedom of assembly and association” under article 11 of European Convention on Human Rights.

Kelly and Richard O’Keeffe, a lay representative from her union, United Voices of the World, were opposed by a top lawyer, Thomas Croxford QC, at the tribunal.

But they established that “cyber picketing”, as well as its promotion and refusing to give details of it to management, are all legitimate trade union activities under current regulations.

Picturehouse had claimed that the cyber picketing was a “cyber attack” and an unlawful conspiracy. The tribunal ruled that it was a legitimate trade union activity.

Kelly Rogers said: “Our strike against Picturehouse cinemas was for the most basic demands: a wage good enough to live on, decent sick pay and adequate parental leave.

“This ruling, which shows how I was sacked for undertaking trade union activities, points to the fact that my dismissal was a cynical attempt by Picturehouse to end our dispute and intimidate union members into not standing up for themselves.”

Another tribunal case, in which three other Ritzy reps were supported by a different union, BECTU, ruled that three were unfairly sacked and, in a rarely used move, ordered that they should be reinstated.

UVW said that in Kelly Rogers’ case the tribunal also rejected the view that she was obliged to disclose the names of fellow trade union members who might also have been promoting cyber-picketing, noting that it was “unreasonable” and “oppressive” to expect her to do so because the discussions at union meetings are confidential, regardless of whether they may have related to potentially unlawful conduct, which in this case in any event “was not self-evident”.

The union said that, in respect of the issue of confidentiality, the tribunal had also noted: “It seemed to us that it cannot be the case that the expectation of confidentiality is lost merely because matters are discussed at a trade union meeting that might not be approved of by the employer, or even, as in this case, the union itself.

“We accept that there will be limits to this proposition, if for example there is clear evidence of a conspiracy to commit a criminal act. But we did not think that threshold was crossed in this case.”

The tribunal also found, as argued by Richard O’Keeffe, that Picturehouse’s oppressive expectation that Rogers would break the confidentiality of union meetings amounted to a fundamental breach of her right to Freedom of Association under Article 11 of the European Convention of Human Rights.