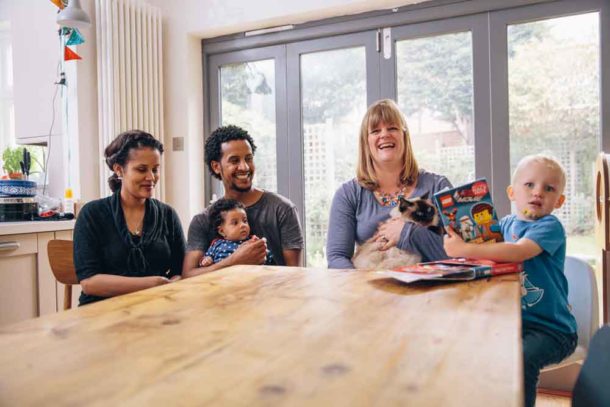 More than 85 refugees and asylum seekers have been welcomed into the homes of Lambeth people by an organisation that a Brixton resident helps to run.

Refugees At Home is a UK-wide charity that connects generous people with a spare room to destitute refugees and asylum seekers.

Rachel Mantell, who helps run the charity from Brixton, says it was set up two years ago as a response to the refugee crisis.

A Jewish family decided to offer their spare room to destitute refugees after being horrified by what they saw on TV that echoed their own family history.

That initial offer– to a Mexican human rights journalist – has turned into a national charity hosting an average of 150 people a night. Refugees At Home has since provided more than 62,000 nights of safe accommodation to refugees from 54 nationalities across the country.

Of the people Refugees At Home is currently supporting, 52% are refugees and 48% are asylum seekers; 72% of them are male.

Rachel Mantell says refugees face the “28-day trap”. When someone gets refugee status, they have just 28 days to arrange everything to support themself in the UK – get a National Insurance number, find a job, open a bank account. Most people can’t do it and end up homeless if charities like Refugees at Home do not step in.

Asylum seekers, meanwhile, are entitled to limited support – but many find themselves destitute while trying to navigate the complicated appeal process. Knowing where they are going to sleep makes the experience much easier.

Hosts in Lambeth have offered rooms to more than 85 guests, including an Iraqi journalist who fell foul of the government by reporting on corruption; a tri-lingual South Sudanese aeronautical engineer; an Afghan translator whose work for NATO put him at risk; a disabled Ethiopian waiting for accessible government accommodation; an Eritrean mother waiting to be reunited with her family; and a young Syrian photographer who was arrested and tortured by the Assad regime.

Hosts say they get a huge amount from offering their rooms.

Hillary Foote, who has hosted in Brixton over the last 18 months, says: “Hosting provides a fabulous introduction to British society and its many idiosyncrasies and is an invaluable stepping stone to independence for the guest.

“As a host it has introduced welcome elements of fun, education, chaos, and a fascinating insight into other cultures”.

There are 56 people offering rooms in Lambeth, but many more are needed. Hosts are completely ordinary people – the charity vets them and offers support, but anyone can offer a spare room. You don’t need qualifications, experience or to fit a certain profile. It is up to the host who stays in their house and for how long.

“We’re not aid workers,” says Rachel Mantell. “We just think that desperate people who come to one of the richest countries in the world asking for help should not end up on the streets.”