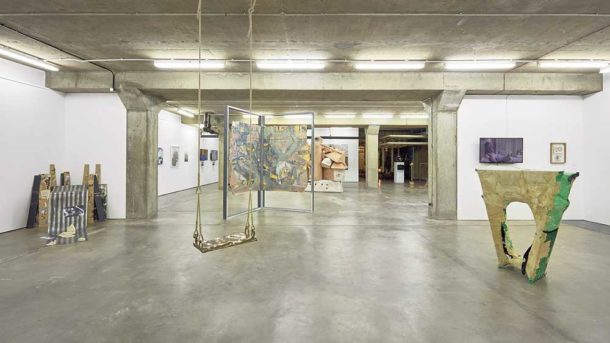 The Art Newspaper reported that the Bloomberg New Contemporaries show had opened in an “edgy new Brixton venue” – whose location South of the river “might be inconvenient for some”.

The “edgy” new location is Block 336 – an artist-run, community oriented project committed to widening participation from individuals and groups who may not typically access contemporary art.

The relocation of the show from the Institute of Contemporary Arts near Trafalgar Square to a community space in Brixton is a revolutionary move, and a welcome one.

The show is free, accessible, and a relief from the stale, sanitised white walls of the art world’s major institutions.

Interesting curatorial decisions blend sculpture with the architecture that surrounds it. And, refreshingly, the more political pieces do not find their radical edge immediately blunted by a commercialised setting.

The show displays the work of 47 of the hottest emerging artists, each given the opportunity to display a single work. The result is an exhibition that lacks a narrative thread and the initial impression is slightly chaotic – a bombardment of sculpture, installation, video-art and painting. But there are plenty of gems to be found.

Tereza Cervenova’s Deluge is a simple photograph of a tree intersected by telephone lines. Initially it looks oddly washed-out and nostalgic, before your eyes adjust to the fact that it has been shot in a torrential downpour. The result is a beautiful, melancholic portrait of a tree.

Martin Sekera’s My Favourite Thing is touching in its comedy and its intimacy. It’s a Black and White photograph of trousers pulled down to ankles to reveal two skinny hairy legs with a bump on one knee, accentuated by the angle of the shot.

Tom Hatton chooses instead to focus his photography on the absence of a subject – his shots focus on the objects of a life in a Calais refugee camp, “objects that trace personal, social and psychological contexts”. The subject’s presence is imprinted on these objects. It’s a no less effective way of telling a deeply personal story through photography.

The standout rising star among the group, Michaela Yearwood-Dan, also explores questions of migration and identity. She draws on her own experience as a young second-generation Black British woman from South London, incorporating “vibrant and sumptuous textures that work as a catalyst between the ‘Oh so tropical’ West Indies and an urbanised London”.

Her painting Springs depicts plants that flaunt their health and fertility in luscious greens and yellows, beneath a snaking Thames river.

Her work consistently uses rich, saturated colours that draw on Western preconceptions of the exotic. Both the form and message bring to mind the work of Peter Doig, a Trinidad-based Scottish painter whose work is currently on display at a free exhibition at the Michael Werner gallery in Mayfair.

Maia Regis’ postman also deserves a mention – a painting on a canvas stitched together from postbags and miscellaneous upholstery. Although indebted to Robert Rauschenberg, it is original in its humour.

The exhibition is sometimes distinctly urban and political, and elsewhere absurd and playful. If you go, you will fall in love with one of these emerging artists.

But it ends on 3 March, so don’t hang around.