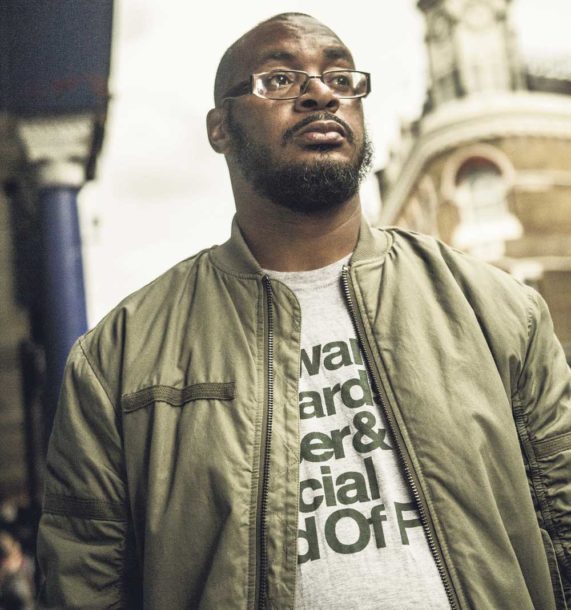 Where better to meet one of Brixton’s true hip-hop pioneers than Pure Vinyl Records on Ferndale Road. Or so I thought, until I discovered that on this particularly cold morning the shop was shut.

Just as I was considering alternative refuges from the wintery streets, I spotted Ty cycling down the pavement towards me.

He suggested San Marino cafe for some food, warmth and a chat about his fifth studio album A Work Of Heart which is released on Jazz Re:Freshed this month.

With a panini in his hand and a thoughtful expression on his face, Ty tells me he’s happy to be on Jazz Re:freshed.

“They remind me that there’s a relationship between jazz and hip hop: what the music is; where it comes from; what kind of freedom there is within it; the politicisation of both musics… There’s a real connection.” That connection can certainly be heard on A Work Of Heart.

The album features some of London’s finest jazz musicians and references classic US jazz, funk and hip hop. On the track Somewhere, Somehow, Someway there’s also a nod to afrobeat – unsurprising perhaps, given that Ty grew up in a Nigerian household listening to Fela Kuti and recently collaborated with Fela’s drummer Tony Allen.

But it is the unmistakable connection between UK hip hop and London’s now hugely acclaimed grime music scene that I want to know more about.

I ask Ty how he feels about the scene and about his collaboration with grime MC Durrty Goodz. “Having Durrty Goodz on the record was an appreciation of talent, an appreciation of what grime MCs are doing, but also it’s a generational nod. I’m trying to symbolically reach out, reach forward, reach back, and let that generation know that you’re absolutely my peers. I’m an older peer, but we’re peers and so let’s get to the music – because if we can get to the music we can make incredible music.”

What’s most striking about A Work Of Heart is that it’s simultaneously political and intensely personal.

On the disarmingly honest track Marathon, Ty describes the anxiety and depression he and so many of us have experienced.

He raps: “Sometimes when I wake up, I don’t wish to carry on, running laps in your marathon, dodgy traps set by Babylon …”

But there are also moments of celebration. Brixton Baby – a nod to US jazz funk legend Roy Ayers’ We Live In Brooklyn Baby – paints a detailed and ultimately deeply affectionate portrait of Brixton with all its pleasures, challenges and changes.

“The sad thing is watching things like opposite Brixton Recreation Centre … The way that the traders are being treated by the council is disgusting and I think we’re going to really suffer – the energy and the bustle of Brixton is going to be muted.

“It’s already feeling like a ghost town in certain areas and I’m not used to that. So there’s definitely an evacuation of Brixton that people don’t seem to care about.

“It’s concerning for me that some people moving in are not understanding that you have to take Brixton as it is. If you like the area then you have to appreciate the culture – not isolate the culture. But I’m here for the long haul. So we’ve got to make it work.”

A Work Of Heart comes out on Jazz Re:Freshed on 2 March.