Friends of Brockwell Park (FoBP), the charity that has protected the interests of the park for more than 30 years, says today (11 December) that two three-day events planned there for next summer “will be a gigantic intrusion into our beloved park, the like of which we have never seen”.

Although the organisers of one event, Lovebox, and Lambeth council say that applications have been submitted for planning permission, tickets for the event have been on sale for some time. Lovebox is scheduled for mid-July. 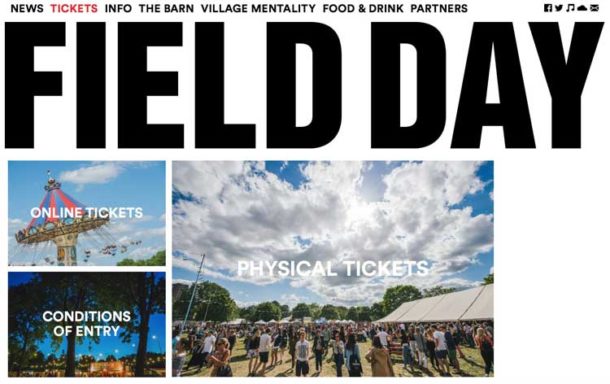 The other event, Field Day, does not yet have tickets on sale online, but its Twitter and Instagram feeds are full of artwork advertising the planned Brockwell park dates at the beginning of June next year.

FoBP said its committee had decided unanimously to oppose applications for the two events because their size was “wholly unsuited to a small urban park such as Brockwell”.

It said the two events would be the largest gated and paid for events ever held in the park. The Lambeth Country Show held in the park for many years is free, as were large events like Rock Against Racism gigs that attracted huge crowds to Brixton.

Both events have previously been held in Victoria Park in East London which is not only substantially larger, but also almost completely flat, unlike Brockwell Park. Both events expect 40,000 visitors or more on consecutive days.

FoBP cited the Sunfall events in the park this year and in 2016 that were for one day only and had 20,000 visitors. “The vandalism, litter, brawling, urinating and defecation were terrible,” it said.

It believes the impact of 40-45,000 visitors a day for six days, with similar damaging behaviour, has not been seriously thought through and is not sustainable.

FoBP estimates that the revenue for the private organisers of the two events would be £6 million each. It says Brockwell Park would get £60,000 directly if this was achieved. Lambeth council would get a further “undisclosed but substantial fee”.

The charity said one commentator had claimed the council would get half a million pounds in total for the two events.

FoBP said: “The financial stakes both for the private organisers and the council are extraordinarily high and the FoBP fears that both will lose sight of whether there is any genuine benefit to the local community, apart from financial, that these two events will bring.

“Parks are not money trees for private companies or cash-strapped councils.”

In a statement FoBP listed five main reasons for its opposition:

Like the residents’ organisation that sprang up with a change.org petition after event organisers posted details to local homes, FoBP stressed that it is not opposed to music or open-air events.

“‘Of course those who can afford it should enjoy open air concerts of the music they like,” said FoBP char Peter Bradley. “But not in a small urban park such as Brockwell. It just does not have the capacity to host such gigantic events. We oppose them utterly.”

Lambeth Green Party has called for full and transparent consultation on the festivals and for the consultation period to be extended.

Lambeth council said that neither event had yet received full planning permission.

Councillor Sonia Winifred, council cabinet member for equalities and culture, said: “There are two new major commercial events proposed for Brockwell Park in June and July. Several layers of rigorous scrutiny, including licensing, safety advisory group, community engagement and planning permission, must be achieved before an event can proceed.”

She said the concerns of residents would be carefully considered.

“If agreed,” she said, “these events will be carefully managed so any disruptions for locals will be minimised, apprenticeships will be offered, local businesses will be boosted and extra money will be received to help fund the Lambeth Country Show and pay for park improvements.”

Lovebox, which started out in Lambeth on Clapham Common, has said that “importantly” it wanted to be “the catalyst for local community events and support throughout the year,” adding: “We’ve already started to engage with local groups like Friends of Brockwell Park and the Brockwell Park Management Committee.”

A wholly owned subsidiary of Live Nation, the world’s largest live events business, Lovebox has a website to receive feedback on the event and says it will set up a “community advisory steering group”.

It said it would take on five full–time apprentices from Lambeth and was “working closely with a number of local groups and organisations to ensure the event reflects the rich cultural and music history of the area and that it truly feels like Lambeth’s own.”

Brixton’s a source of ideas and inspiration