The chair and secretary of the Carnegie Community Trust (CCT) – the body chosen by Lambeth council to be part of its redevelopment of the Carnegie library in Herne Hill – have both resigned at the end of acrimonious negotiations with the council.

Carole Boucher, the outgoing chair, and Fred Taggart, the secretary, said they were resigning in protest at the council’s decision to “give half of the building to a commercial company”. Taggart said it was time for council leader Lib Peck to “stand aside”.

The two accused the council of “ramming through” a deal with its leisure provider GLL, giving it large parts of the building rent-free, with “unknown” procurement arrangements.

They said the council was both insulting and pitting itself against the community it is meant to serve and was setting up the trust to fail.

The arrangement between Lambeth council and GLL – which is to run a gym in the basement of the former library building once it has been dug deeper at great cost to the council – is the main reason for the pair’s anger.

They say that nobody outside the council knows the procurement arrangements for this deal, which has also been the subject of enquiries by Lambeth People’s Audit.

Boucher and Taggart, both former Labour Lambeth councillors for Herne Hill, said that in 2012 the council had asked the Herne Hill community to develop viable proposals to use the building housing the library as a community hub.

The council had promised that, if this was done, it would transfer the building to a community trust.

“We are immensely sad that now, after five years’ hard work on developing proposals, we must stand down in protest,” they say.

Their statement says that, part-way through the formal process to transfer the building, the council said it wanted to put its leisure provider, GLL, into part of the building rent free.

The council has refused to amend its position, they say, and, instead, “rammed through” the GLL deal.

Boucher said: “No-one wants this deal between the council and GLL. We cannot get to the bottom of why the councillors are doing it. We are told there is a public benefit, but the procurement arrangements are unknown to us or anybody in Herne Hill.”

She said that the council needed “to make a very strong case if it intends to give this public space to a private company for no rent and to also spend £1.5 million digging out the basement to accommodate its gym.

“It is insulting to offer the community the bits that will be left over.” 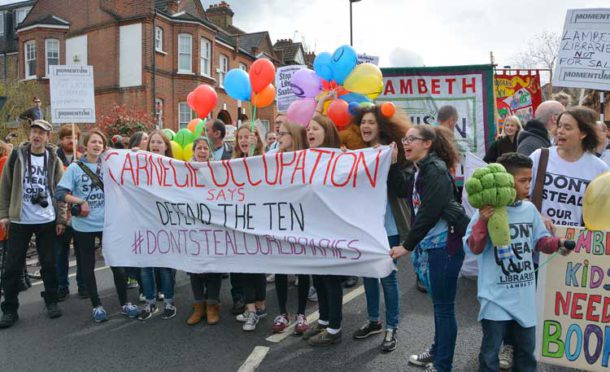 Boucher said that the trust – not GLL, nor the council – would be expected to raise the £6million needed to refurbish the entire building and also to meet the council’s costs for the space to be used by a cut-down library.

Taggart said that, with goodwill and cooperation from the council, CCT “could have delivered its proposal by now and the hub would be opening within months”.

Instead, “we are seeing a Labour council being rolled over. The people driving these policies are pitting themselves against the communities they are meant to serve.

“Herne Hill is losing its one publicly accessible civic building and our beautiful Carnegie is not being conserved and respected.

“Labour urgently needs to reconnect with the voters who put their trust in it. They have wasted five years of our lives and thousands of hours of volunteer time working on a doomed bid.

“If they only wanted to rent us a floor they could have done that in 2012.

“It is time for council leader Lib Peck to stand aside and make way for someone who better understands Labour values.”

The remaining members of CCT intend to continue to try to work with the council, but have published a lengthy analysis of the difficulties they face.

They also make strong criticisms of the way the council has handled the entire process. They say that they were not consulted on council plans to take up more than a third of the existing gardens with heating and ventilation plant for the basement gym.

The council said the reason for this was that two organisations, CCT and another group, were bidding competitively to take over the library. “We can see no reason why Lambeth could not have consulted both bidding organisations while developing its proposals,” the statement says.

The other bidder, the Carnegie Library Association, wanted to reinstate a full library in the Carnegie building and is backed by the Defend the Ten campaign, whose long and loud protests against the council’s plans have included large demonstrations and an occupation of the building.

Management of the project has been both chaotic and wildly optimistic. At one point the council said a new library would be operating from the still-closed Carnegie building from early this year.

And while the Carnegie row has had the lion’s share of publicity, the nearby Minet library is also closed – although Lambeth council’s website still says that it will reopen with a neighbourhood library in 2017.

Background to the Carnegie saga

Council Q&A on its library policies