Residents of central Brixton campaigning against the growing problem of noise and anti-social behaviour outside their homes are appealing for support ahead of a crucial meeting on Monday (9 October).

The Sleepless Brixton campaign says that noise and anti-social behaviour have got significantly worse in recent months.

They say local residents cannot sleep properly in their own homes.

Some say they have faced abuse and threats if they speak to the people causing the disturbances.

The campaign is asking anyone affected who has not so far told of their own problems to do so now at the campaign’s website. 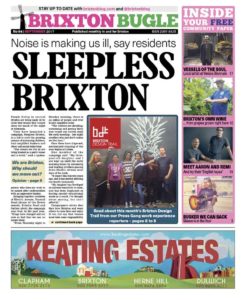 Since the September Brixton Bugle carried the story, residents from other streets have contacted the campaigners to say the problem covers a much wider area.

Sleepless Brixton has spoken to councillors, local MP Helen Hayes, the police, Transport for London and local businesses in a bid to find a collective solution.

Helen Hayes has arranged a crucial meeting for Monday to try to fashion a solution to the problem that all parties are happy with.

The Sleepless Brixton Campaign is appealing for support in advance of the meeting. Karin Chrisiansen explains why:

“The town centre at the heart of Brixton is a diverse community. It’s a place where people live, work, shop, raise their children and grow old. We love this place and many of us have been here for many decades, without a problem,” she says.

“But in the last year or so, things have changed.

“Since the all-night weekend Tube began, there has been an influx of people and ever louder amplified noise.

“Residents are becoming ill. Often, we dread coming home on the weekends. The streets we live in are being treated as a party venue and a toilet.

“Visitors shout, scream and pee their way round our streets till the early morning.

I want to keep Brixton as a place where people of all ages and backgrounds can live and stop Brixton becoming a theme park for the worst kind of drunken tourism.”

A venue that has attracted particular attention is Brixton Beach.

People involved in creating the new mural of Micheal John outside the Beach on Popes Road told the Blog of drunken attempts by clubbers from Beach to climb ladders with people already at the top of them and disruption of the equipment being used.

You can sign up to support the campaign here.

Some of the ‘Sleepless Brixton’ campaigners explain why they have had enough:

As a resident of 45 years in Electric Avenue I have seen a change for the worse. We had everything, lovely shops and a vibrant market that sold everything and a fantastic second-hand market. Men came from all over south London to have their suits made here.  The shops were all different. Brixton was known as the West End of the South.

But the Avenue is now a dirty, noisy place to live. It smells of urine.  The Avenue is not cleaned properly or disinfected as it used to be. Shops please themselves when they close.  We no longer have Wednesday half day closing.  Shops open all day Sunday, even Christmas and Boxing Day.  In total we have activity 7 days a week, 52 weeks a year.

Brixton now is all about money and who will pay the highest rent.  It’s not about families and homes anymore.

Bea, who grew up in Electric Avenue

My mother has been driven out of her home by anti-resident policies. She’s in her seventies and had lived here all her adult life.

A resident from Effra Road

I’m affected by the noise of drunken revellers passing by, littering our forecourt, guys entering private property and peeing in our communal forecourt and abuse if I tell them off and, sometimes people drugging up. I LOVE Brixton – I’ve lived here over 17 years. These issues need to be tackled.

I have lived in Brixton 23 years. It is in the last 18 months that Brixton has become like a 24-hour hen party. There’s no respect for residents. I now have to take sleeping pills.

I live in Nursery Road and have noticed how much more noise there is. The so-called revellers don’t seem to care about shouting, singing and screaming in the early hours. I can even hear the buskers by the Tube station from my house. I can’t believe the police haven’t done anything about it. I really dread Thursday to Sunday as I don’t know what else to expect. It’s ridiculous that not only my sleep is disrupted, but also that of other Brixton residents. I’ve never known it to be this noisy and I’ve grown up in Brixton.

The antisocial behaviour of the people who come to Brixton every Thursday to Sunday is truly staggering. It is not just central Brixton, but also the area around Brockwell Park and the Hootananny which get regularly covered in rubbish.

People deal and take drugs in the streets next to the pub. It’s not just the noise, it’s a whole catalogue of illegal and anti-social behaviour that is the problem here. The council is too keen to buy into this quick and irresponsible type of “regeneration” and it’s not thinking about the “unintended” consequences of it. Is Brixton destined to become a transient, characterless, no man’s land neighbourhood where nobody will want to truly settle in? If so, what are the social, urban and economic consequences?

I live in Rushcroft Road with two young children. My concern is noise and hygiene. We also witness a lot of drug-taking throughout the day and night.

We have loud people, and parties. They are rude. We have already called the council so many times. I’m fed up!

I am proud of where I was brought up and it’s a shame that the changes to Brixton have had such a negative effect on those who love it most.  We need help and sleep.

The noise has got noticeably worse in the last year. We now have nightly collections by big bin lorries at 12.30am – why? This is in addition to the drunken shouters coming home from nights out, peeing on the street in full view, the shouty groups of people who congregate day and night in-between Solon and Plato Roads. It never used to be this loud.

The influx of entitled, drunk and disrespectful posh kids is turning Brixton into a cross between a constant hen-do and a university freshers’ week. It’s upsetting to see and live through.

It is impossible to get a good night’s sleep over the weekend without waking up to drunken and high people screaming, swearing and fighting. The street smells of urine and faeces and is full of rubbish. I Just hate coming home at the end of the day after work!

I have lived in Brixton for 37 years. I have always loved living here, but am getting increasingly upset and despondent about the anti-social behaviour, particularly the peeing.

It is 8.05 on Wednesday 6 September 2017 and as I was just closing my blinds. Two young women were peeing in a parking space located opposite my home. My nights out are now always spoilt at the weekends by having to pass numerous people peeing as I walk back from the Tube or buses on Brixton Road.

I am unable to sleep several nights a week. People shout and scream until 2 or 3 in the morning. Buskers use large amplifiers, again until the early hours of the morning. The streets, and even people’s front doors, are used as toilets.

11 September, 2016
We use cookies to ensure that we give you the best experience on our website. If you continue to use this site we will assume that you are happy with it.OKPrivacy policy