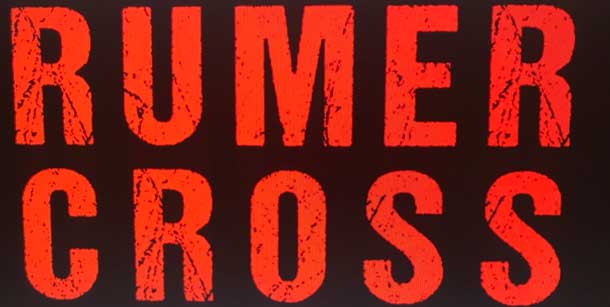 South Londoner Joshua Winning is crowdfunding on the unbound.com site to raise the money to get his novel Killing Rumer published. With a week to go, he’s raised 93% of his target. Badass heroine Rumer Cross needs your help.

Winning says: “This is a book that features a complicated, badass heroine who never takes the easy road. I wanted to write something dark and unconventional, but also hopeful. It’s a story about family, fear and attempting to fit in – all things I’ve lived!

He’s on his third draft and the book is ready to roll.  He adds: “All the money raised through crowdfunding goes straight into the book. It covers editing, cover design, proofing and publicity. By pledging, you’re helping to make this book happen. So thank you! Pledge here.

“It goes without saying that this book is hugely important to me. It’s about the ultimate outsider. Somebody who believes something fundamentally tragic about themselves. But who is scraping through anyway, surviving despite the odds. It means a great deal that so many people are giving Rumer their time and helping get her story out there.”

You can read a synopsis of Killing Rumer at unbound.com. Here’s a taster.

“Rumer Cross is cursed. Scraping by working for a dingy London detective agency, she lives in the shadow of her mother, a violent criminal dubbed the ‘Witch Assassin’ whose bloodthirsty rampage terrorised London for over a decade.

Winning is an author and film journalist who writes for Total Film, SFX and Radio Times.

Jessica Dyer - 3 June, 2020 0
Jessica Dyer talks to Migrateful founder Jess Thompson about the empowering nature of cooking and connecting communities through a cultural exchange. Migrateful is a social...

‘We could be the generation to make the changes’

Simone Richardson - 4 June, 2020 0
Simone Richardson found it inspirational to witness Black Lives Matter protesters marching past her home and to interview some who live locally I live not...

Alan Slingsby - 4 June, 2020 0
Campaigners have increased pressure on the owners of Brixton’s covered markets over the threatened eviction of the iconic Nour Cash & Carry store in...

Contributor - 2 June, 2020 0
Lambeth town hall in Brixton was lit up in purple tonight (2 June) to mark the death of George Floyd in Minnesota. Lambeth council is...