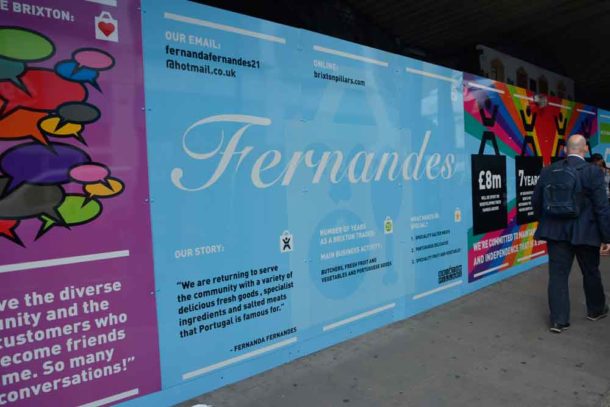 Network Rail has said it is to make a renewed effort to improve its communications with the Brixton community and traders from its arches on Atlantic and Brixton Station Roads.

It is also talking to some traders who had sub-let from arches leaseholders about the possibility of them returning.

The move comes amid concern about the likely effect of work to refurbish the arches.

Both the Brixton Business Improvement District and Lambeth council have already expressed serious concern to Network Rail about the continuing blight on remaining businesses in the area caused by the simple closure of the arches.

The prospect of disruptive work on the arches has prompted one local councillor to suggest the whole project is unworkable.

Four traders have refused to accept Network Rail’s terms to end their leases and are taking the issue to court with a case that is not expected to be completed before next year.

Two traders – a pawn shop and bookies – have leases without break clauses and are continuing to use their arches premises.

One of three local Coldharbour ward councillors, Rachel Heywood, has made a strongly worded objection to a Network Rail planning application that must be agreed by Lambeth council before work can commence.

Cllr Heywood, while a Labour Party councillor, has been suspended from the ruling Labour group because of her public opposition to its plans for the Carnegie library. She believes Network Rail’s plans for refurbishing the arches may be “completely unworkable”.

Cllr Heywood’s objections could not, at first, be published on the council’s planning website which states: “Comments may not be submitted at this time. There is no statutory requirement for consultation on this application”.

But, after they were revealed by the Brixton Buzz website, they have now appeared on the council’s planning site.

She asks if visitors to nearby Brixton Rec and Pop Brixton, for instance, will need to wear dust masks.

Her objection says: “It is no secret that I have opposed this scheme from the outset and I think it is ill-considered, profit-driven and probably completely unworkable.

“The CEMP demonstrates a comparable lack of thought, investment and sensitivity to the environment as does the plan overall.

“I do not believe the project can be delivered as set out in the CEMP without an unacceptable level of disruption and danger to the local community and to those who work in and visit Brixton.

“It is also likely to lead to the demise of yet more small local businesses, adding to the toll created by the evictions.”

New hoardings in front of the arches and a new website are part of Network Rail’s communications initiative.

The hoardings are intended to identify which local businesses will return to the arches and, as far as possible, which unit they will return to.

Network Rail says that the majority of original traders plan to return. 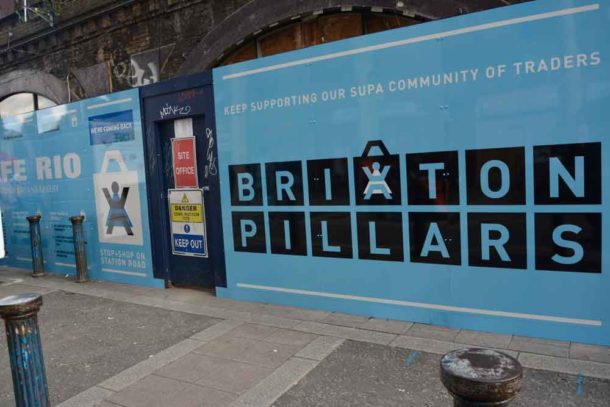 The company says it is committed to “populating new units that will be created as the result of the re-development with independent businesses that complement returning traders”.

The first phase of the scheme – stripping out and checking those arches that are vacant – has been completed, Network Rail says.

It expects a decision next month from Lambeth council on its plans for the actual work of refurbishment.

Matthew Ball, senior external affairs manager for Network Rail commercial estate, said that the majority of original traders would be back and that profit made by Network rail’s commercial estate is reinvested in the railway system.

“We are pleased that the majority of our existing tenants are returning,” he said. “Of the remainder, some were sub-tenants with no direct lease from Network Rail, or have retired, and we are talking to some sub-tenants about their ability to come back.”

Ball said enabling works had been completed successfully. “The arches have been stripped out and inspected by the route structures team.”

He insisted that plans are on track and that the main works will commence when and if Lambeth council agrees the plans. This is likely to be late this month or early September.

Ball said he expects all traders will be back by the end of April 2018.

He says those returning have been guaranteed seven years of “stepped rents” until 2025. “They will still be paying 2015 rents at that point,” he said.

Traders say that, eventually, rents for the arches premises will triple.

Ball said that Network Rail recognises it is important to stay engaged with tenants to ensure a smooth return. He said the bookies and pawn shop had contracts that did not have break clauses and therefore had to be dealt with separately.

The four traders who have remained and are taking Network Rail to court – Baron White Goods, Budget Carpets, Brixton Tools and Denmay Fabrics – had had compensation offers like the others, Ball said.

Ball insisted that in the “phase one strip-out”, Network Rail had retained heritage tiles in the unit occupied by Mash Brothers fishmongers, but that safety was its first priority.

Responding to concern that the new works will disrupt transport links, he said: “The phase two works will not affect the trains above or lead to road closures”. The Network Rail submission to Lambeth council’s planning committee sought to mitigate disruption.

“Our first priority is the existing tenants,” Ball said. “Second, what we can do for the sub-tenants. Third, who goes into empty units.

“Our priority is small local independent businesses. And we need to think about what’s the best fit.”

Recognising that communications had been “poor”, and tenants needed regular updates, Network Rail has asked Binki Taylor, a Brixton Business Improvement District committee member, to support the tenants on its behalf.

She said: “I see my role as helping to develop awareness of what is really happening and providing support to those tenants who have got lost in all of this.”

A statement on the new website developed for the returning traders – brixtonpillars.com –  says:

“Brixton Pillars represents the longstanding community of independent traders in the Arches, who serve the many communities of Brixton.

“Against a backdrop of change and development, Brixton’s traders have shown the spirit embodied in our resilience in meeting many challenges over the years.

“It is this spirit that will result in the majority of traders returning to the Arches after redevelopment – doing what we do best, back in the community we love.

“A community is only as strong as the people within it. Brixton is a testament to how people from so many diverse backgrounds and perspectives come together to work as one.”

We are looking forward to welcoming you on our return next year.”

The returning businesses that are planned to feature on the new hoardings are:

Fernandes The Portuguese deli and butcher

Mr Adamson of Cheques for Cash, formerly at No 5 Atlantic Road, will also be returning with a new business next year, as will the Moroccan Café. Together they for a majority of the original traders.

Café Brixton has re-located to 19 Brixton Station Road and the others are currently discussing opportunities to return to new units with Network Rail under direct leases.

Feared disruption from work on the arches is not the only construction issue facing Brixton.

Lambeth council is backing a plan to demolish Superdrug next to Marks & Spencer and rebuild a six-storey hotel on the site. The only access would be from the busy and polluted Brixton Road or the very narrow Nursery Road that runs behind the planned hotel and already serves several large shops.

Further into the future, Sports Direct has confirmed to Brixton Blog that it is planning a major store on the site it recently bought that borders Brixton Village, Brixton Market and Pop Brixton.

Council warned of occupations and strikes if library plans go ahead