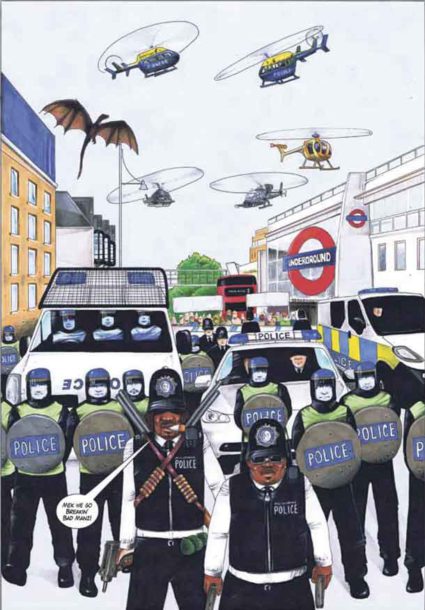 Delores William talks to Bobby Joseph, creator of the comic character Scotland Yardie, about the inspiration for his brilliant new graphic novel set in Brixton and why all the royalties will go to charity

“I write comics, I’ve always written stories. I used to draw comic figures as a teenager.” This is how creator and writer Bobby Joseph, who grew up in Ladywell in south east London, introduces himself.

“I used to read Private Eye magazine in the eighties and would laugh like a drain or be totally puzzled at the antics of some of the deliciously disgusting characters, Glenda Slagg and Polly Filla.

“In 1994, I came across Skank Magazine – The World’s Most Dangerous Comic. It was the first Black satirical comic written and illustrated by Black people. I must emphasise that this is not just a Black comic for Black people, it is so much more than that. It was widely read by a varied demographic as it was one of the first comics to represent the south east of London, which just so happens to have one of the largest Black populations in Britain.”

Well it’s back – this time in the form of the graphic book Scotland Yardie, published by Knockabout Comics (available on Amazon and in Tate Gallery bookshops).

Bobby, who was the teenage editor of the comic and had friends help him come up with ideas, eventually joined up with BBC journalist Dotun Adebayo and that’s when the comic really took off.

Circulation at its peak was around 30,000. It was jokingly said the crime rates dropped on the days when the comic hit the shelves.

Based on characters from Brixton, Lewisham, Peckham and Hackney it was a delight for a young mixed race woman like me. I really could identify with the characters.

They were mainly based in Brixton. Some of the best known were Scotland Yardie and Mary Mampy, she wear tight panty (snigger).

Mary was born out of an encounter Joseph had at a party in Peckham when a rather large lady came over grabbed him and demanded he dance with her. He explained: “She dragged me up for a slow dance. Man had no choice!!! Girl was tough!!! Man was scared. She gave me her pager number and demanded I contact her the next day. I never did and there are still parts of Peckham I don’t bop through even now.”

When the Metropolitan Police finally admitted to institutional racism and started a positive discrimination drive to recruit more ethnic people, Bobby jumped on that and came up with the character Scotland Yardie.

Scotland Yardie is a Black policeman brought over from Jamaica by the Met after the drive to recruit more diversity fails.

A rough, tough, belt-licking, ganja smoking, take no nonsense old school Jamaican cop – anyone disrespecting him would end up -regretting it.

In the new book Scotland Yardie has been partnered with another Black officer, PC Ackee-Saltfish. 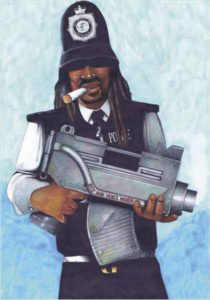 Bobby told me: “Everyone loved Scotland Yardie, people gravitated to him, I guess it’s because he’s an anti-hero and people tend to like that. The Yardie with a badge is universally loved.”

I asked Bobby if it was a reaction to any racism that he himself experienced in the nineties growing up in Ladywell.

“Of course I experienced racism growing up. The nineties were no exception. The characters were an exploration of the times. Satirising people’s general attitudes and ignorance, that was always the plan.”

Bobby has also written for The Voice newspaper. At first they banned him from coming into their offices to visit a friend who worked there after they deemed him a nuisance.

He went on to write for the Lenny Henry’s BBC1 show Lenny in Pieces, Vice.com and Loaded. Of course The Voice let him write for them eventually. The BBC have him on their website credited as “instrumental in featuring some of the first comics by Black creators featuring Black characters.”

The comic lasted from 1994 until 1997 when a spat with a celebrity ended with the magazine having to close down. Bobby says that the cost of producing the comic had already risen and then, with a libel claim, it became impossible to carry on.

Four years later, in 2001, Bobby’s daughter Akira died just before her third birthday on a holiday to Dominica with her mother. Bobby, who had separated from the mother and remained in London was devastated.

She was diagnosed with meningitis. Her last words as she lay dying were to ask for her Papa. This haunts him. “My heart broke. I went numb. How was I supposed to deal with such a terrible pain?”

“At the end of 2001, I was writing for BBC1’s The Lenny Henry Show. I remember being in the green room and everyone around me was enjoying the sketches and I remained solemn.

Jaunty Bobby is in a different place now, not over his grief, but grown with it.

You can’t help smiling when he laughs.

Meningitis Now, a charity that helps families who have been affected by this terrible disease, became a place of solace for Bobby and now, nearly 17 years later, all royalties from the sales of the new book will go to the charity.