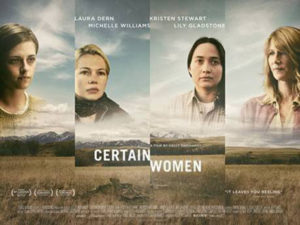 CERTAIN WOMEN is a three-pronged narrative. Firstly arrives Laura (Laura Dern) whose law practice gives her little voice until a rogue client Fuller (Jared Harris) pulls her into his crazy world. Next is Gina (Michelle Williams) who is fixated on buying some local sandstone to begin work on a new house with her husband Ryan (James Le Gros). The connection? Ryan and Laura are having an affair. The third story centres on a horse ranch hand who remains nameless played by Lily Gladstone. She wanders into a school law class taught by Elizabeth (Kristen Stewart) and the two begin a friendship. 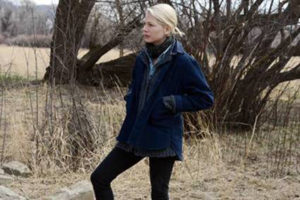 The film is wrought with many frustrating constructs. Why create a clear connection between the first two women then have such a minimal one with the third narrative? The only connection to the last story is that Dern’s character is a lawyer in Livingston as well as Stewart’s character. This devalues the three-pronged structure. Dern and Harris share some stiflingly badly edited scenes together. Some shot/reaction shot work is so clunky it is laughable. Williams gets one good scene with the owner of the sandstone who appears to think she is invisible and only responds to her husband. Ultimately, the strongest story is that of the female friendship between Gladstone and Stewart and its undertones. Any redeeming quality of the film lies in that third act.

As an American it is fascinating to experience this film in London. CERTAIN WOMEN opens with a long take of a train chugging through desolate scenery. Reichardt seems obsessed with transportation. Americans reliance on cars for mobility, a theme she thoroughly beats down in her film WENDY & LUCY. I would be remiss not to point out that the film’s reception here in the UK has far surpassed that in the US – where it made hardly any noise at all. Maybe it is a yearning to understand the heartland of America and the quiet lives led in Montana? I cannot say, but it hardly kept my attention.

CERTAIN WOMEN is in theatres in the UK (including The Ritzy Cinema) on 3 March.

Alex and the Wonderland celebrate song release at the Ritzy