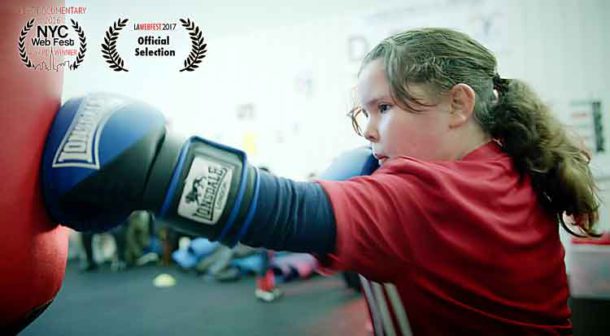 It’s Thursday – and that means another release in Chocolate Films’ wonderful 1,000 Londoners series.

Regan, number 205, is eight and does boxing at Dwaynamics in Loughborough Junction.

She is sure that a girl can do all a boy can, or even better: “Always give your best. ’Cause it doesn’t matter what gender you are, you can do anything … A girl boxer could be better than a boy boxer … They even do girls’ football now, so it’s easier ’cause then it’ll be a fair world.”

Regan’s older sister is her hero. They annoy each other, as all siblings do, but Regan tells how her sister is an inspiration and she loves her.

Regan also looks up to Brixton’s Pastor Lorraine Jones from Angell Town, who set up Dwaynamics to carry on the work of her son Dwayne, who was stabbed to death in Brixton in 2014.

Regan is part of the Battersea-based Chocolate Films 1000 Londoners’ season Century: 10 Women x 10 Decades, celebrating women in London which premiered at the Ritzy in January.