Before I moved to Brixton I lived on a very busy main road (the A2) not the part of the A2 where the traffic just flies past and can’t stop. No – I lived on the part where there was a never ending traffic jam.

I would have to be very careful about looking out of the window half nude because what I thought of as a rather lovely quiet jam free day was just a trick, traffic jams don’t make noises they just sit and people stare up; up to my first floor flat.

I was one of the only people on my road who would put stuff outside my door that I no longer needed. I could have taken the bits and piece that I didn’t want to the recycling centre or second hand shop but I enjoyed the buzz of putting it out the front and seeing that within an hour or two the bits would be gone.

When I was packing up to leave my home after all those years, I put out the last of my possessions late at night, it was a balmy August evening and before I knew it there was a flock of women sifting through it all and, like pigeons at a bread feast, there were soon just a few crumbs left.

Well, imagine the joy I experienced when I moved into overcrowded, rather lovely Brixton, front garden walls packed with goodies that owners don’t want anymore. “Walls that never stop giving,” as a friend remarked.

A lady saw me going through a box of kitchen utensils quite early into my arrival in Brixton and came running back to me saying she was too embarrassed to go through the box on her own. I have no such qualms.

She ended up with some rather smart pans and I sauntered off with my new electric blender. Be careful with electrical goods. But I find that if someone has left them out it’s because they are in working order. By the way, my companion gave me a kiss for stopping and giving her courage to come have a look.

With my lifestyle of minimalism and moving regularly, I don’t want to overburden myself with stuff. It doesn’t mean I don’t want stuff. Of course I do. 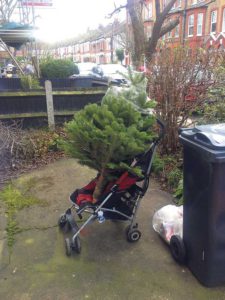 I want – and I got – lovely, gaily decorated dinner plates, cafetières, and mirrors – two large, one small. Silver (pretend) goblets, child bike helmets, oh, and bikes, one adult, one child’s, hula hoops, a massive ball of very thick blue rope (I left that) and my pièce de résistance, a Christmas tree and poinsettia.

I remember the days when you were very limited in where you could buy your trees but now every shop and his mother sells trees. Hence the left-out well wrapped Christmas trees. The Christmas tree was an acquisition on Christmas Day and, funnily enough, I found a buggy that had been put out so wheeled my tree home in that. Yes, I was that woman.

Now there is a difference between leaving out lovely stuff and just plain old dumping your rubbish which makes me so mad I could spit. (Dry spit, mind).

Or bags of rubbish which have split giving the poor, slightly demented townie foxes a lovely but very untidy dinner. Is it really beyond you to go out with some rubber gloves on and pick up your crap? It is yours isn’t it? Why do we have to step over someone’s left over dinner and dirty nappies? Gross.

By the way, there are “street champions” who can actually get great events arranged for your road. They can organise street parties or play streets. They also look out for our more vulnerable neighbours.

If you fancy getting a bit more involved instead of moaning, try applying at street champion.

Tests show ‘no spread’ of Covid variant in Lambeth