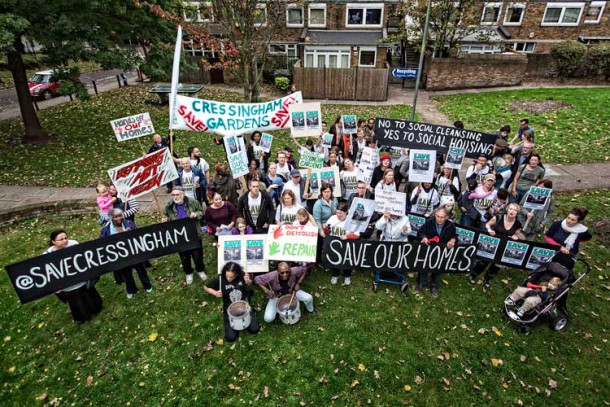 A High Court judge has rejected a challenge to Lambeth council’s plans to demolish and rebuild its Cressingham Gardens estate overlooking Brockwell Park.

Residents opposed to the plans said they would fight on, but Justice David Holgate said in his judgement that the council’s decision to reject all of the refurbishment options for the estate that they had put forward was “legally unimpeachable”.

The council had to re-run consultations on its plans earlier this year after another judicial review sought by residents about a year ago found that it had unlawfully ruled out some options.

Matthew Bennett, council cabinet member for housing, said the council would “continue to work with residents to move this project forward with the next step being the appointment of a ‘development management team’ in the New Year.”

This team will be responsible for working with residents to develop detailed plans for the new estate.

Lambeth council said that its proposed redevelopment would see all the 306 properties on the estate replaced with a minimum of 464 new homes.

The council said the decision was made “following extensive analysis and consultation with residents over a number of years”.

It said the judge’s decision – released today (21 December) after a three-day hearing in November – rejected seven separate grounds put forward by its opponents, including claims that:

the council had acted unlawfully by choosing an option which failed to meet its own mandatory financial principles;

cabinet members had been misled over an alternative proposal for redevelopment put forward by some residents; and

that the consultation with residents did not provide enough information about effect of the council’s plans on their right to buy their council homes.

‘Not all bad news’

Andy Plant said: “This is obviously not the Christmas present we’d hoped for.

“Of course we had everything crossed for a brilliant win like last year. But it’s not all bad news, as we still have everything to fight for, and will fight on to save our homes and community.”

He said the case had “forced the council to admit some very alarming facts”, which opponents would use in future challenges.

“‘The facts we’ve exposed should serve as a call to action for Lambeth residents, and particularly people living on estates in this borough, who are worried about what its politicians are up to in their name.”

Plant said Labour councils across London were using the housing crisis as a reason to bulldoze council estates.

“But,” he went on, “there is strong evidence that this land-grabbing practice has actually made the problem worse, driving up prices and even making people homeless.

The judicial review coincided with London mayor Sadiq Khan’s launch of a consultation on his Homes for Londoners: Draft Good Practice Guide to Estate Regeneration which says that “demolition should only be followed where it does not result in a loss of social housing, or where all other options have been exhausted”.

Plant said: “Mayor Khan – who depended on his background of growing up on a council estate to bolster his mayoral campaign – should be requiring strict and independent cost-benefit analysis to be carried out before any estate demolitions are given the go-ahead.

“He should not be watering down his pledges out of fear of standing up to his friends in powerful Labour-dominated councils.”

He said: “Those closely watching the mayor’s consultation believe that an election pledge to make resident support key to any demolition, has been diluted.”

Plant said that, during the case, Lambeth council had admitted the facts behind many of his grounds of challenge, including that it had failed to account for a £7.5m public subsidy for the redevelopment.

He said this revelation had been “buried” in a witness statement from Lambeth council finance director Christina Thompson.

Plant said that, during consultation with residents, the council had claimed that any refurbishment options for the estate would be off limits because of a “borrowing cap” on its housing revenue account.

But, he said, it had been revealed in the hearing that residents and cabinet members “had been supplied with out-of-date financial information, that concealed £48 million of extra borrowing capacity”.

Residents had formulated their consultation responses, including a People’s Plan for redevelopment, based on the council’s claim that there was very little debt headroom.

Partly as a result of this, cabinet members were led to believe that funding the People’s Plan was an impossible prospect when, in fact, there was a pot of up to £52 million to draw from, Plant claimed.

“Following the close of the consultation, Lambeth moved the goalposts and cited a completely different barrier to funding – it claimed it would not be able to pay off the loan.”

Plant said data released by the council suggested that a major factor in to the dire condition of its future housing finances is the regeneration programme itself.

Cressingham resident Gerlinde Gniewosz, a co-author of the People’s Plan with Mr Plant and others, told the court that the council’s wider regeneration programme – it has plans to demolish and rebuild other estates – would strip council coffers of millions of pounds in rental income from council tenanted homes, because income from the rebuilt homes would no longer go to its housing revenue account but, instead to “Homes for Lambeth”, a “special purpose vehicle” set up by the council to enable it to redevelop council estates.

The Department of Communities and Local Government (DCLG) has warned that if a local authority seeks to use such a vehicle to get round debt limits, it will be in breach of government policy.

Plant said the council’s approach was in direct conflict with government policy, which had been confirmed by the DCLG in a letter to a Cressingham resident which said: “It is important that new council tenants should have access to the Right to Buy and that new homes should not be built by councils which are excluded from the Right to Buy … The Government believes that local authorities should support people to achieve their aspiration for home ownership through the Right to Buy.”

Plant added that the House of Commons public accounts committee, whose MP members scrutinise public spending, had warned that “council taxpayers will end up footing the bill” and that other services would be under threat if risky commercial ventures by local authorities go wrong.

Andy Plant, who has lived in Cressingham Gardens for 20 years and had hoped to buy his council home in the future, will – along with all the tenants – lose this right as well as his secure council tenancy under the plans for Cressingham Gardens.

Lambeth council said that tenants were not losing their right to buy because they could choose to move to a council home elsewhere in the borough, also retaining their secure tenancies.

Although the judge dismissed this claim, Plant said he had agreed that the council was obliged to consult on the contractual right to buy, which it has not yet done.