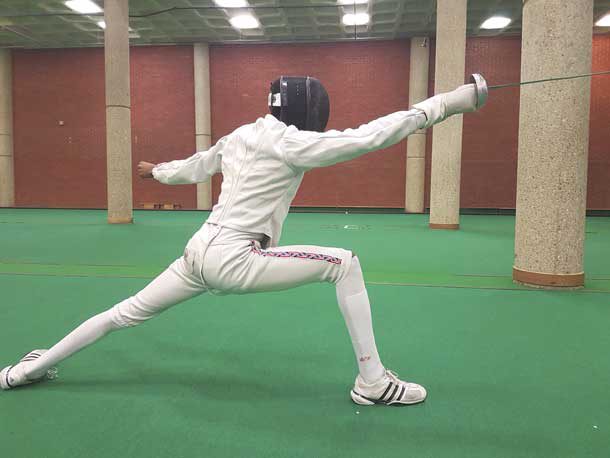 A Brixton teenager has been hailed as a fencing prodigy by coaches at a local fencing club established by a Polish Olympian and backed by Satay Bar founder Patrick Foster.

Tarriq Roache, who is 15 and the current under-18 épée fencing national champion, has been touted as ‘one to watch’ by trainers at Brixton Fencing Club, one of London’s most successful fencing associations.

The club, which was founded by Polish fencer Marek Stepien and is based at the Brixton Rec, has dozens of members who have competed at international tournaments including the Commonwealth Games.

Tarriq, a towering teen who stands at over 6ft 2, is set to take on some of world’s best young épée fencers at an international competition for under-17s in Copenhagen next year.

“I loved sword fighting when I was younger and came across fencing classes at the Brixton Rec when I was seven,” said Tarriq.

“I became a competitive fencer at the age of nine and currently compete at national and international levels as well for my school.

“In a few weeks’ time I’ll be off to Copenhagen, to take part in an international fencing competition there. My aim is to finish in a top eight spot.

“I also hope to be selected for the European Épée Fencing Championship, which will take place in March. 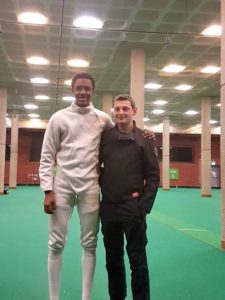 “My coach Kamil (pictured right with Tarriq) has helped me a lot. I don’t think I would have progressed as much as I have without the support I’ve had from Kamil and my Mum.

“Patrick Foster and the Satay Bar have been a great help too. They have given me lots of encouragement and sponsored me to take part in international competitions. Hopefully one day I’ll make it to the Olympics. That’s my dream.”

Kamil Golisz, Brixton Fencing Club’s head coach, has high hopes for Tarriq’s progress and hopes to see his protégé make his mark at an international level next year.

“Tarriq is currently in the national team for under-17s and he’ll do one more season in that division. Earlier this month we went to Grenoble, France where he faced some very strong competition from Italy and France. French and Italian fencers are among the best in the world.

“Tarriq did incredibly well and came eleventh out of a competition featuring 180 fencers.”

This month he will be competing in Copenhagen and then Luxembourg and Bratislava next year.

“I’ve trained Tarriq for many years since he was a little boy. We’re lucky that he’s a member of our club here in Brixton. He’s very talented,” said Golisz.