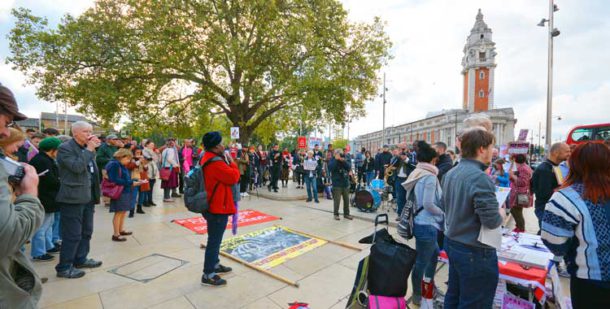 Protesters against Lambeth council policies rallied in Brixton’s Windrush Square today before heading to Clapham Common for a picnic.

About 200 people gathered in the square, where, despite the organisers’ pleas for a “pink, peaceful and pleasant” event, a Labour Party stall was vandalised and a member of the extreme left-wing Revolutionary Communist Group (RCG) set off a social media storm by saying that leaders of the council’s Labour Party administration should be “thrown into the Thames with rocks tied round their ankles”.

Later, some protesters staged a sit-down in the road on the way to Clapham Common. 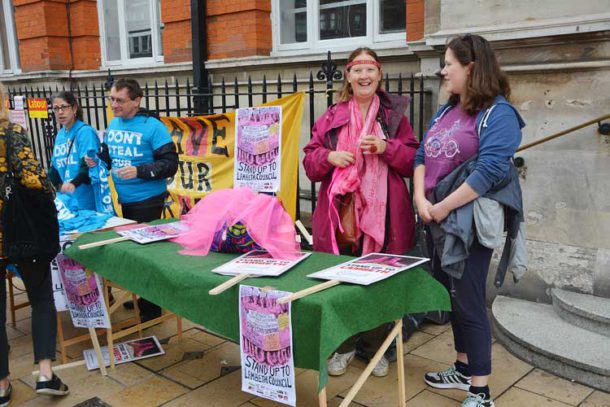 The vast majority of protesters, both calmer and in pink, objected politely but firmly to council policies on, among other things, libraries; plans to demolish the Cressingham Gardens and Central Hill estates; the proposed private Garden Bridge; the closure of shops in Network Rail’s arches; and the planning threat to Club 414.

Things got off to a bad start when Central Hill campaigner Daniel, who declined to give his second name, began violently dismantling a Labour Party stall that stood among others outside Brixton Library.

Members of the RCG set up an “open mic” on the fringe of the gathering and South London RCG member Andrew George kicked things off with a rant in which he asserted that, unlike Lambeth, there is no homelessness in Cuba and asked “How many people have Lambeth council killed?” – apparently referring to rough sleepers. He followed this up with his suggestion that council leader Lib Peck and colleagues be thrown into the Thames.

Earlier, he had discussed how opponents of the Labour party could “seize power” in Lambeth and why councillors should be intimidated.

He was followed by rapper Potent Whisper (AKA Georgie Stephanou) whose actions in leaping onto a table at a planning committee meeting and throwing red glitter dust were followed by the council reviewing its policies for public attendance at its meetings.

Other speakers included a child who said the council was the same as US presidential candidate Donald Trump as they were both “corrupt and racist”.

Andrew George’s plans for Labour councillors, once published on social media, led to attacks on the Labour Party pressure group Momentum – which had no discernible presence at the protest – from other Labour Party members.

Momentum had been included on a list of backers of the protest. One other organisation listed had already asked the Blog to remove its name from the list we published as it had not given permission for it to be used.

The protest was organised by Karen Bennett, secretary of Central Hill Residents’ Association, and Nicola Curtis, its chair.

Vauxhall Labour MP Kate Hoey sent the protesters a message of support in which she said: “All of you have come here today with one clear message for the council – Lambeth, you are not listening to us.

“We all know the Council is facing huge challenges from the cuts imposed by the government, but in so many of the decisions that have angered local communities it has been clear that, despite public utterances about listening, the voices of many of you have been ignored.

“The Garden Bridge is a classic example. The local Bishop’s Ward Labour councillors and thousands of local residents have made it clear their opposition not just to this waste of public money, but also to the bridge being located where no one wants it. Lambeth could have stopped it but have chosen not to do so. They have not listened.

“Thank you to all of you who have been working hard in our communities to protect our local services, libraries, parks and housing estates.

“There have been so many genuine alternatives put forward to council plans on libraries,housing and regeneration. But you have not been listened to.

“I will continue to campaign with you to preserve and enhance our communities. I do not want to see housing estates being destroyed with virtually no genuinely affordable council housing replacing it. The Tenants on the Westbury Estate have been ignored and sidelined just like what happened to those on Cressingham Gardens.

“I call on our Labour Council to welcome debate and positive criticism. With a 59 to 4 majority, the councillors need to listen even more to voices outside the council chamber.

“Councillors should be encouraged to speak out and not victimised like Cllr Rachel Heywood was for her brave stand on speaking out against the closure of libraries.

“I hope the council will see today’s protest as a wake-up call and that it will be positive, impactive and, most of all, peaceful.

Like me, I know you will stand up against injustice, inequality and ineptitude wherever it comes from.” 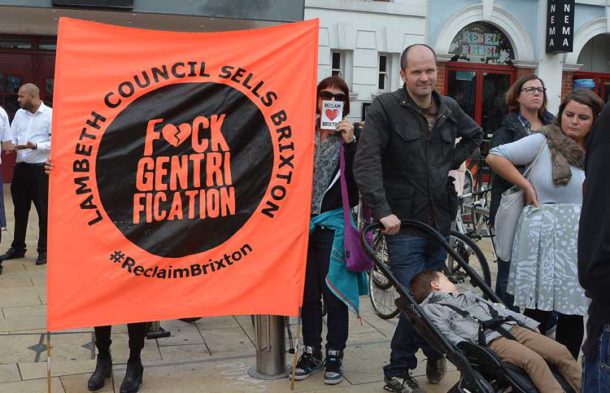 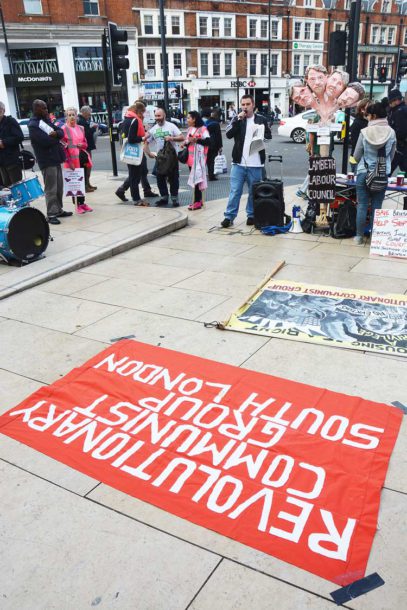 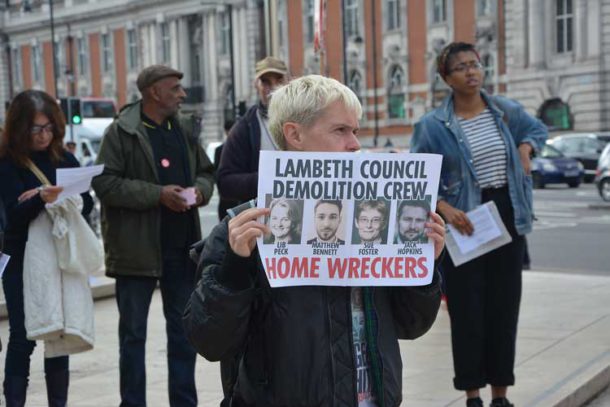 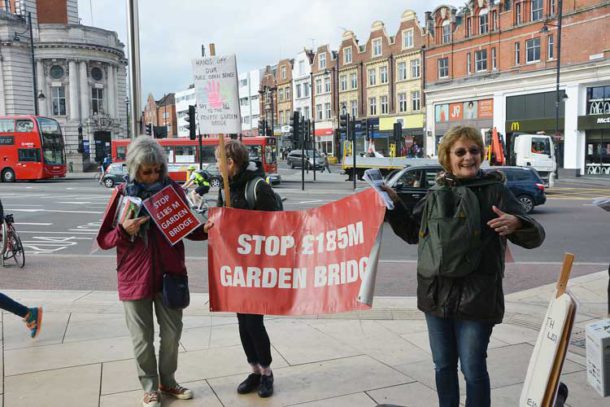 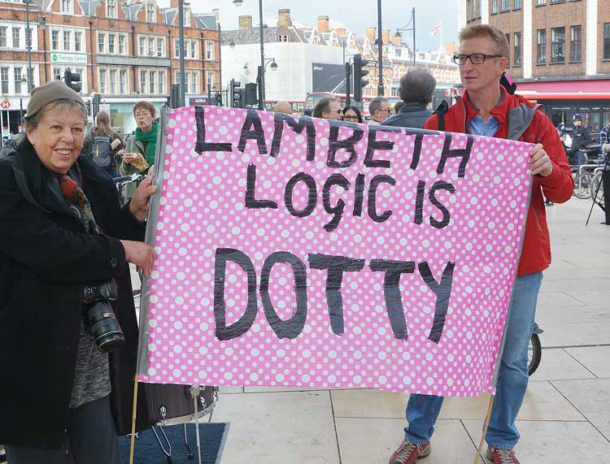 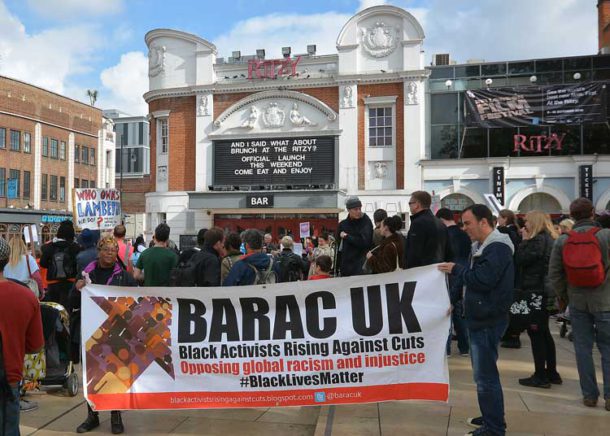 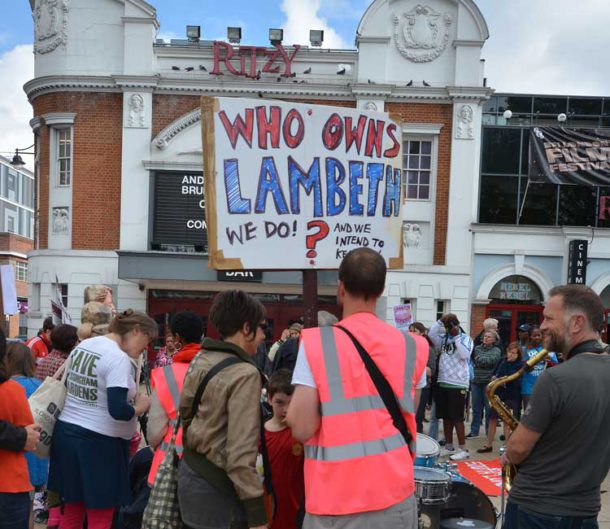 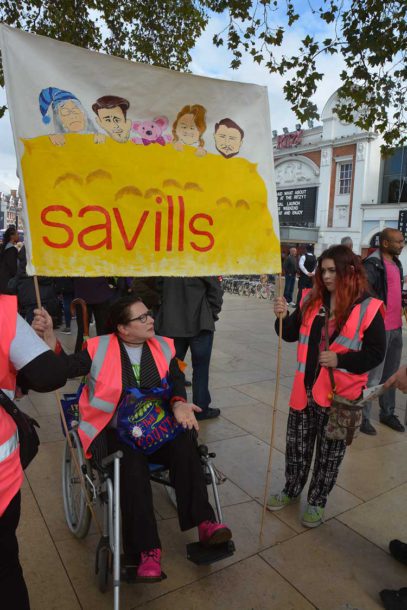 Pop up library in the park challenges council’s plans