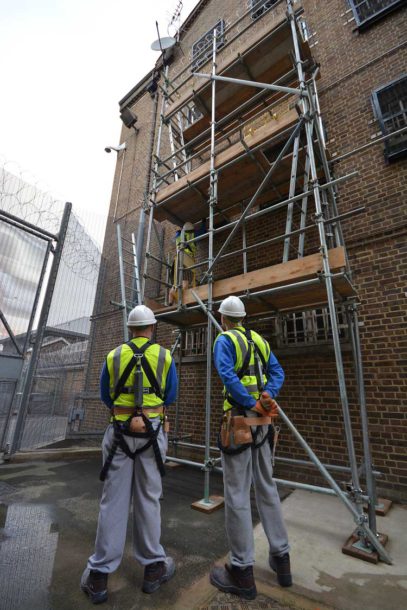 A seven-metre high scaffolding tower clings to the side of Brixton Prison’s G Wing – and scores of people were there to inspect it yesterday.

It’s not what you expect to see in a prison – even one like Brixton, which ceased to be a local prison in 2012 and became a “Category C” training establishment.

But, in what is believed to be first such scheme in a UK prison, the Pop Brixton based charity Bounce Back is providing training that will help prisoners to get good jobs when they leave and the construction industry to meet a skill shortage.

Fran Findlater, founder and CEO of the charity, told people at the formal launch of the scheme in the prison’s Clink restaurant – with breakfast provided by its Bad Boys Bakery – that Bounce Back already had a queue of people prepared to offer jobs to 20 scaffolders trained by the scheme.

Four have already passed the 12-week course that should enable them to start work as scaffolding labourers – a job that commands pay of £100 to £110 a day. If they continue to progress, they could be earning £160 a day in a year or so.

“What Bounce Back does is to give people who have made mistakes the opportunity to reintegrate into the community,” he said.

The average reoffending rate for someone leaving a UK prison is 40%. For those who have been helped by Bounce Back it is 12%.

The scaffolding course at Brixton joins other skill training there provided under contract by Bounce Back including drylining (using plasterboard to create internal walls) and painting and decorating.

Both Findlater and Elliott stressed that the success of the scheme was due to a network of industry, charity and government partners that had overcome both practical problems like supply of materials and security and wider doubts about the scheme.

Debbie Akehurst, head of economy and communities at Land Securities, told the launch audience that her company had been working on employment programmes for five years and with Bounce Back for three.

Of the Brixton scheme, she said: “It’s a win-win situation for everyone – people get a second chance, the industry gets skilled workers and our communities become safer by reducing reoffending rates.”

She paid tribute to governors of Brixton prison who had been prepared to back projects like the scaffolding course.

“I have an idea for a tunnelling course,” she quipped. “But that might be a little more difficult.”

She also praised Alandale construction whose managing director Matthew Warner had “worked tirelessly” to get the project running and whose company had donated the materials it needed.

Other partners include the leading prison training charity Novus and the government’s National Offender Management Service.

Training is provided by Mark “Scaff” Harris, a former Brixton resident, who now commutes back. When he first saw the advert for the job online, he thought it was a joke.

But, he says, the prisoners he trains are more motivated and disciplined than those on the outside.

One of them, Dave, was due to be released four days after the launch event. He will have a diploma to confirm his scaffolding training and a job waiting for him.

He can also explain how scaffolders use Pythagoras’ theorem to make sure their constructions don’t collapse.

And he has the Construction Skills Certification Scheme (CSCS) card that anyone working in the industry now needs. Bounce Back ensures that its trainees gain the card while still in prison so they are ready to work as soon as they are released.

It was not Dave’s first time in prison. But with a skill in high demand and a job waiting for him, he is determined it will be the last. “I’m not coming back,” he said. “That’s it.”

Started in 2011, Bounce Back currently trains up to 60 people a day and has an 85% success rate of people leaving prison either going into further training or employment. Since it started it has worked with nearly 600 people.

Prisons minister Sam Gyimah said the charity was “an excellent example of how employers can provide invaluable work opportunities for offenders while in prison to help them turn their lives around. Schemes like these can help to break the cycle of re-offending, which means fewer victims and saves the taxpayer money.”

OurSpace are making noise this spring

Should not this Brixton martyr be remembered with a real blue...