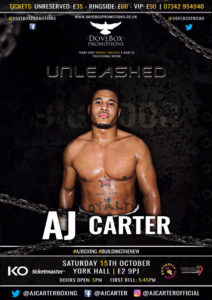 Local heavyweight boxer AJ “Bigdog” Carter will make his return to the ring after 11 months out when he takes on Ferenc Zsalek at York Hall in Bethnal Green on 15 October – a card that will also see Dominic Akinlade look to extend his unbeaten record.

“The shoulder is as good as it can be,” said Carter. “It was an injury that wasn’t going to repair itself as much as I rested, so I had to have surgery. It’s fully healed now – I can throw punches from all angles and there’s no pain.”

Carter has signed a one-year deal with Dove Box Promotions and is looking to get his career back on track after a promising start saw his explosive style and evasive head movement likened to Mike Tyson.

He teaches me about life as well as boxing

His record currently currently stands at eight wins and two losses from 10 bouts, and he has been training with Richard Williams of Miguel’s Gym ahead of the fight.

“The training has been brilliant,” said Carter. “We gel perfectly. He teaches me about life as well as boxing.”

The Dove Box card at York Hall Green will feature another Miguel’s fighter in undefeated heavyweight Dominic Akinlade who will take on Bulgarian Milen Paunov.

“I’ve been back to the gym working on the technical flaws,” said Akinlade. “The heavyweight division is looking very exciting over the coming years and it’s great to being a part of that. At some point I want to fight for the English title.”

Lots of women want to learn to box …