He joins a long list of winners trained by a gym that is rooted on local culture – and that includes “white collar boxing”.

“What we’ve achieved has been unheard of for years,” says Kheron. He wants it to inspire other people in the community. His championship is just one product of the gym’s remarkable success over many years.

His route to a top spot in amateur boxing has not been a smooth progression. He first boxed in 2007. “Then I stopped for about 10 years” after an operation and then “getting in with the wrong sort of people”.

In fact, at one point he was banned from Miguel’s – he’d clearly been smoking, was messing around and showing off to girls.

He recalls one of his first visits: “We came in a bit macho, aggressive, boisterous and not very mindful of others.” The group took turns with a punch bag.

When it was his turn, he was as ferocious as he could be.

“I’m hitting this bag as though it’s offended my family or something.

“The caretaker came up and saw me and touched me on the shoulder. He said: ‘Follow me. Get in the ring’.

“At first I thought: ‘Here’s somebody going to complain we’ve done something wrong – we did get a few complaints in those days’. But he put me in that ring and gave me a circuit. He said: ‘Very good’.

“And just getting that feedback from a male figure – ‘this is good, well done’ – for being aggressive and expressing myself – was unusual. But I liked it, so I kept on coming back.”

Then he was banned, but … “One day I came back and everyone was like: ’Here he is again’.” 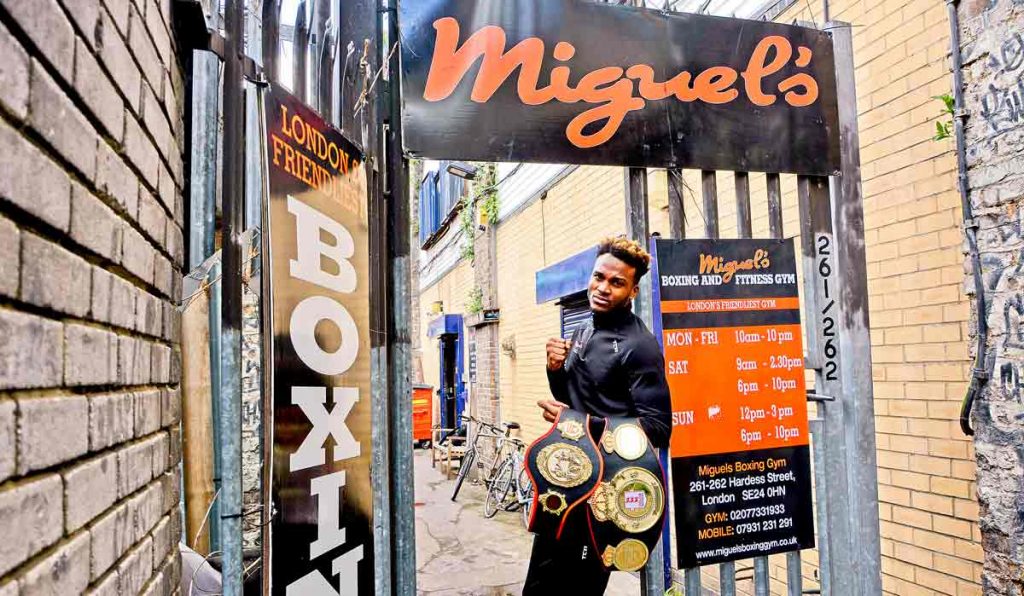 But Kheron was now “in a different state of mind”, even though it took him a while to convince people he was serious. But not that long.

“I became team captain in a matter of months,” he says. “I came with that attitude: Reach one, teach one. Leading by example, Creating that team spirit. That sense of belonging.”

Starting again in 2016, he found Miguel’s “a very nurturing environment”. It allowed him to “tap into my greatness, my potential”.

That is something he had been talking to young people about in one of his other roles – as a motivational speaker. Then, “I thought: ‘why not explore my potential to be a boxer?’ trying everything I speak about and putting it to the test. And that’s what I did.”

Now he has brought back a national championship to Brixton and Miguel’s.

Kheron, until he gets in the ring, is a long way from the typical image of a successful boxer. Not only is he a motivational speaker for young people who also had a career in music that he swapped for boxing, he’s also writing a book.

Quietly spoken and thoughtful, he turned an interview into a conversation.

While austerity has seen provision of services and spaces for young people in Brixton and elsewhere disappearing, establishments like Miguel’s, Afewee, Dwaynamics and others are filling the gap with no start-up funding.

“If Miguel’s did not fund itself, it wouldn’t exist,” Kheron points out. “Other provision is needed. Not everyone wants to be a boxer.”

But anyone who wants to be fitter, healthier and learn self-defence should give it a try, he recommends.

He stresses how friendly and nurturing Miguel’s is. “I walked through these doors a different person to who I am today,” he says.

Now, “boxing is my anchor, that moors me. I’m grounded with boxing. I’ve come to a point in my life where I need boxing.” And one of the reasons is that “Miguel’s is designed for growth and development.

“Everything that all these organisations speak about – in terms of community development, in terms of young people and violence – happens right here.

Kheron, who trains five days a week, three to six hours a day, says that “Right now there’s a massive buzz at Miguel’s.” At last year’s Haringey Box Cup amateur tournament, the club was second out of 83 boxing clubs from all over Europe.

Kheron, who was born in Jamaica and has family in Brixton, says: “I don’t live in Brixton, but I’m a Brixtonian. I just love Brixton. Brixton has that vibe, that cultural vibe that I can identify with. That vibe is electric.

“Brixton is like a hub for various strong cultures. It’s diverse. There’s a lot of grassroots organisations (he mentions the music charity Raw Material where he spent time) a lot of local businesses that I like to support. 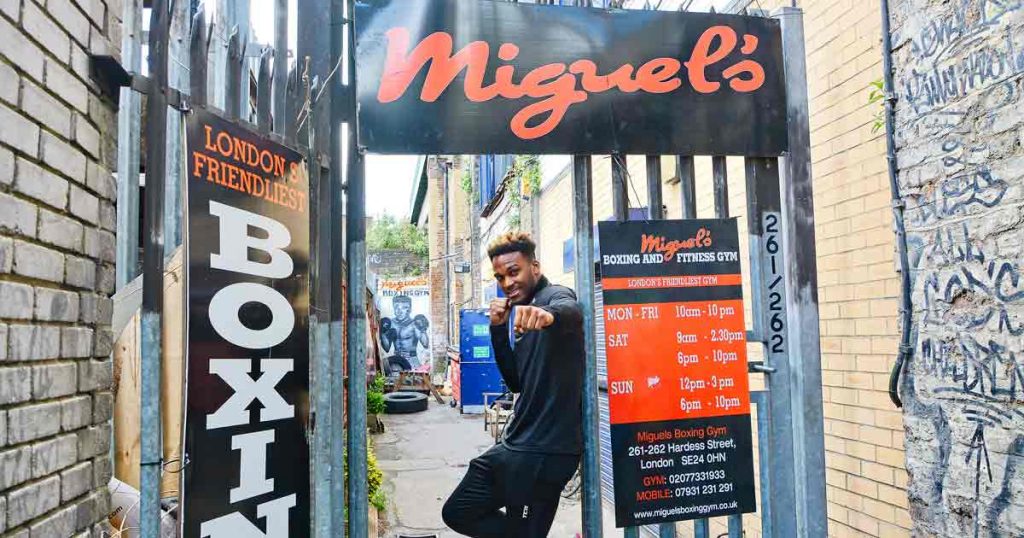 Years of dedication and hard work

Places like Miguel’s don’t just happen. They are based on many years of dedication, hard work and experience.

It was founded 20 years ago by brothers John and Steve Simms. They named it Miguel’s after their father, who made sure that, growing up on Railton Road in the tough 1960s, boxing kept them out of trouble.

“If we were playing out, he would just say to us: ‘No. You’re at the gym’,” says Steve. “We’d just cry, wouldn’t we,” he says to John. “We’d come back with our bags and a packet of chips. That was his way of keeping us out of trouble.”

And they have trained and worked with many top professionals, from 90s WBO heavyweight champion Henry Akinwande to current contenders Dillian Whyte and Isaac Chamberlain.

“One year we had seven champions,” recalls Steve.

Kheron is their first England Boxing National Amateur Champion … “after being a pain in the arse – we chucked him out of the gym for a while,” Steve confirms.

Unfunded by state or charity, the immensely friendly and diverse gym with its many woman and “white-collar” boxers relies on volunteers young and old to meet the needs and ambitions or its many young (the gym runs “mums and babies” classes)  and not so young users.

Exhibition marks 100 years of the Stockwell war memorial and its...