Norma was honoured with a special commemorative plaque, installed on an ever green plant stand outside Tate Brixton Central Library, easier this month (September). The tribute was organised by Annick Alet and Bill Linskey of the Friends of Windrush Square, which was followed by a well attended reception at Age Concern (who Norma also advised) in the Vida Walsh Centre.

Norma Elaine Williamson came to London from Jamaica as a young girl. She lived, initially with her mother, in Stockwell which was to be her home for the rest of her life.

After school she worked for a Brixton law firm, then as a tour organiser where she spent a year in Spain and learned the language. She ended her working career as director of human resources at The National Institute for Health and Care Excellence (NICE).

Brixton Society and Friends of Windrush Square also paid tribute: “Her post-retirement life was just as varied. She continued to use her HR skills running a consultancy specialising in mediation work. 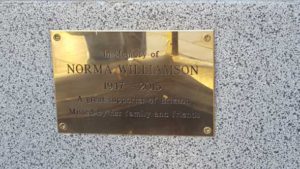 “A great passion of hers was a concern for the elderly. Used to Jamaican extended families, she
was appalled by the isolation of
many older people and, typically, she did something about it. Firstly by befriending and helping vulnerable neighbours, she then got involved in what is now Age UK Lambeth. She became a trustee and quite an organiser of activities.

“Norma was a tireless volunteer at the Brixton Society, recruiting members, organising events, writing publications and she was our Treasurer for some 16 years.  As if this were not enough, she was always ready to try something new. A course on perfumery and before you knew it she was selling her own made perfumes and toiletries in Brixton Market.

Annick Alet added: “it was fittingly a lovely event, basked in sunshine and human warmth and attended by some 60 people in honour of Norma’s memory.  Her plaque was unveiled by her son Stuart and it’s truly heartwarming to see it, discreet yet very present in the heart of the Brixton Norma loved so much.  Everlasting gratitude to all of you for making it such a memorable event. I would also particularly like to thank Bill and Diana Linskey as well as the Brixton Society for facilitating the memorial.”