Bill Linskey, chair of the Brixton Society, has called for the toilets on Windrush Square to be reopened as public toilets funded by all the new money coming into Brixton.

His appeal came as the toilets were offered for rent on behalf of Lambeth council by Lambert Smith Hampton (LSH), the commercial property arm of Countrywide plc, the UK’s largest estate agency group 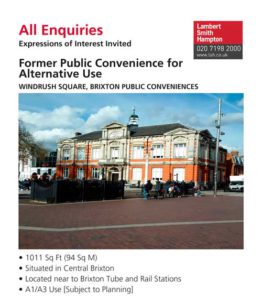 LSH said that preference would be given to “parties who are able to reprovide some paid use public WC function within the building”. Together, the two public conveniences has more than 1,000 square feet if floor area.

Linskey said that for many years the lack of public toilets in Brixton had been one of the most frequent complaints, and not just from members of the Brixton Society.

“The situation has worsened with the burgeoning of the night time economy, which is supposed to be good for the area, bringing business, jobs and money into Brixton. If that is the case, then some of that money should be spent on providing the necessary facilities to support these activities,” he said.

“Instead we have urination in the streets, shop doorways and people’s front gardens. Sadly, often by people who would not normal behave antisocially but are ‘caught short’ because of this unacceptable lack of facilities.”

LSH says that suggested alternative uses include café and bar, but is inviting offers, rather than mentioning an annual rent.

The closing date for expressions of interest is Tuesday 6 September.

LSH has already organised one site viewing. There will be two more strictly invitation-only viewings on Thursday 28 July and Thursday 4 August.

Did you know Bill Daniells?