Adeshina James of Miguel’s Boxing Gym took gold in the senior B light heavyweight division as six local fighters competed in the Haringey Box Cup at Alexandra Palace in June.

James has now won all four of his fights this season – two coming by way of stoppages.

“I knew it was going to happen,” said the 29-year-old. “I’ve been working for this for three months – training hard, balancing with work. I’m very happy. Thanks to God.”

Others fighters competing over the weekend included Sammy McKay, Alexandra Williams and Ryan Kettle who all exited in the semi-finals, with Yusuf Daniju and Brahima Kpowswowa going out in Friday’s quarter-finals. Miguel’s head amateur coach Mike Burton spoke of the challenges of maintaining the sharpness of his charges for whom boxing is a part-time, unpaid pursuit. “It’s like a cup of tea,” said Burton. “No one likes lukewarm tea, you like it hot, and to do that you’ve got to keep the kettle boiling. If they’re not fighting enough the guys lose their sharpness and you’ve got to boil the kettle again.”

There was nothing tepid about James’s opening bout on Friday night. Up against Delroy Dapaah of Neasden Boxing Club, the Brixton man floored his opponent within a minute of the first round with a crushing overhand right before forcing a standing eight count before the bell rang. The second round started in much the same way as the first, with the referee stopping the fight shortly after.

In his semi-final on Saturday, James faced Aiden Cassidy of Repton Boxing Club – the east London gym where the Krays trained during their fledgling boxing careers.

A scrappy affair saw James win a split decision before being awarded the title on Sunday after his opponent, Andrew Knight of Sevenoaks ABC, was forced to withdraw due to an eye injury sustained in his semi-final. 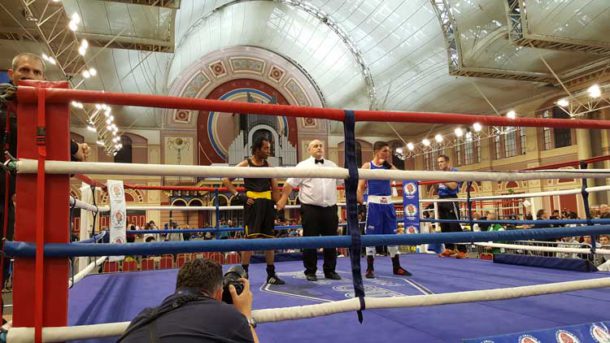 Miguel’s coaches Granville Williams and Chris Lodge were in attendance alongside Mike Burton on all three days. Arriving with their boxers for the 9am weigh-in and preparing for bouts throughout the day, they left Alexandra Palace late into the night.

Last year’s winner in the senior A middleweight division, Yusuf Daniju, was unable to defend his title this year. The bespectacled neuroscientist lost a unanimous points decision to Finchley ABC’s Chris Onwuegbusi in the quarter-final.

Coupled with a tough opponent who had stopped all comers on route to victory himself last year, Daniju was observing Ramadan and unable to eat or hydrate until moments before his bout late on Friday night.

Club captain Sammy McKay was out to avenge a disputed decision in the 2014 final by winning the senior A 64kg weight class this time round. Despite landing a number of sharp jabs and maintaining a tight defence for the first two rounds, the higher workrate of Kieran Bailey of the Royal Air Force Boxing Association won more favour with judges as McKay lost the semi-final on a split decision.

Welterweight Ryan Kettle took on Amado Newis Celso from Switzerland in his opening bout on Saturday. The 31-year-old from Tooting only started boxing three years ago and juggles training with his job at King’s College Hospital.

In a frenetic encounter Kettle peppered his opponent with blows but also took a fair amount of punishment. With fatigue setting in by the third round, Kettle’s shots, though incessant, were lacking power and Celso was awarded the victory by split decision.

Female senior B competitor Alexandra Richards showed courage by taking the fight to a bigger opponent in Shannon McCarthy of Newdigate ABC on Saturday.

With a shortage of fighters at her natural 51kg weight class, and faced with the alternative of not fighting at all, Richards was forced to step up to 54kg on the eve of the event. Although Richards battled hard, McCarthy won the bout by a unanimous points decision on the judges’ scorecards.

Rangy welterweight Brahima Kpowswowa exited the competition at Friday’s quarter-final stage. The Stockwell-based fighter took on the shorter, stockier Lamin Conteh of Islington Boxing Club, and having failed to establish his jab early on lost a scrappy senior B encounter by a split decision.

Lots of women want to learn to box …

Brixton heavyweight on the comeback trail