Young members of a boxing project that began life on Brixton’s Angell Town estate were honoured at an awards ceremony led by a local church minister, Lambeth police and a two-time former world heavyweight boxing champion.

Local MP Helen Hayes and Lambeth’s first black mayor, Lloyd Leon MBE, were there at the Loughborough Junction railway arch now used as a base for non-contact boxing and fitness classes attended by children and adults from across south London.

The Dwaynamics project was established in memory of Dwayne Simpson, a 20-year-old former Lambeth college student who was stabbed to death in 2014 after coming to the aid of a friend being chased on Brixton Road.

He had set up a boxing club in Angell Town with the aim of turning young people away from gang culture and helping them to learn new skills. 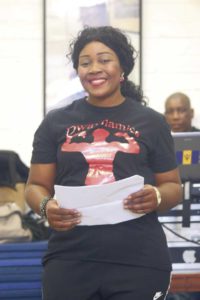 Simpson’s friends and his mother Pastor Lorraine Jones (left) were inspired to create Dwaynamics to continue his work. The project led to the creation of the Lambeth Boxing Awards.

“These awards are a joint community and police project. On the community side we have got local coaches and trainers putting so much energy into the work we do,” said Pastor Jones.

“We also have some humble and inspirational police officers who come here every week to train our young people.

“It all started off with Angell Delight which was the first premises Dwayne was given to set up his boxing project. When Lambeth police commander Richard Wood came to my home to pass on his condolences after Dwayne died, he asked to see the premises, based two minutes away from my home.

“When I brought him to Angell Delight, which is a run down community centre, he looked at the space and told me he was going to help me to keep a legacy for my son.

“Commander Wood’s deputy, super-intendent Sean Oxley, led a team who have worked with us and supported us when we registered Dwaynamics.

“We want to grow bigger which is why we created these boxing awards and I am so proud of all the young people who received their awards. They are an important part of our community.”

Superintendent Oxley joined Pastor Jones in paying tribute to the young award winners and the local coaches who train them.

“Dwaynamics and the Lambeth Boxing Awards are not just about boxing,” he said. What we have here is people working together in a positive environment. My passion is boxing. Aside from my police work I boxed for Lambeth borough from 1989 to 1992.

“I had 43 fights and learned all the things that you can from boxing and the benefits that it can provide to young people. We have had 30 boys and girls come through. I’m very proud of them and I’m also proud of the work our coaches and police officers do together on a weekly basis.”

Youngsters living with disabilities are among the dozens of children who have joined the project’s classes in recent months.

Among them is nine-year-old Shanakaye (above with Tim Witherspoon, centre, and Dwaynamics coaches) who has attended sessions for 12 weeks.

Her mother, Patricia Broderick, says the project has given her daughter a confidence boost.

“Shanakaye has cerebral palsy. When I started going to Dwaynamics boxing sessions she kept asking me if they had a class that she could do. At the time they were not running classes for young people with disabilities but Richard Davis (Dwaynamics head coach) was keen to do it but didn’t know where to begin.

“I introduced him to the people at the Mary Sheridan Centre, part of the Evelina Hospital. They have physiotherapists and occupational therapists that help children with disabilities.

“Shanakaye was the first person with a disability to attend the non-contact boxing sessions they run here. She used to walk with a twist and before she came here she couldn’t skip. Now she can and it’s really helped her physically. She is more confident in herself.”