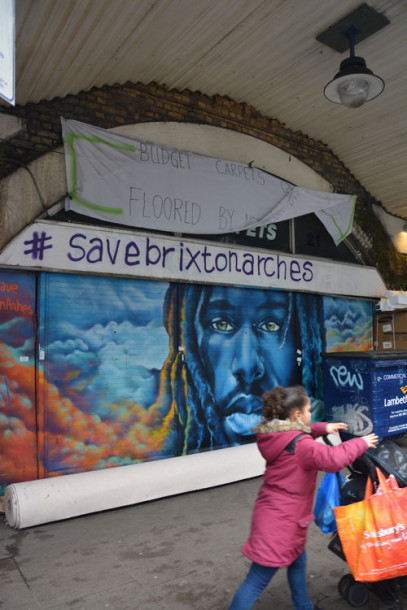 Traders due to be evicted from the arches in Atlantic Road and Brixton station road have been told by landlords Network Rail that they will not be offered alternative spaces in Valentia Place.

The landlords told the tenants in February to leave their current trading spaces by August 19.

Some traders had been offered half an arch each in a new venue off Gresham Road for £800 per month.

But Network Rail has now rescinded the offer.

Traders were offered small lots in venues like Pop Brixton, although the large stock requirements of most arches traders make these unsuitable.

Traders were told last July that they could return to the arches once renovations lasting a year had taken place, albeit with rents rising by over 300 per cent within six years of their return.

Traders have still not been presented with a copy of their new lease, despite the eviction date looming.

The news has intensified fears among traders that their landlord wants to let the spaces to wealthier retail clients cashing in on the influx of wealthy young professionals to the area.

“It’s social cleansing,” said Ray Murphy, owner of Budget Carpets. He said he was disappointed with the level of communication from Network Rail.

He added that he welcomes development in Brixton, but called for the landlords to respect the businesses that give Brixton its character.

“We just want that happy blend,” he said.

A Network Rail spokesperson said: “We’re delighted that many of our long-serving tenants will be coming back to refurbished arches in Brixton after our project has been completed.

“Any rumour to the contrary is simply not true.”

H&T pawnbrokers and bookies William Hill were both told they would not have to leave the site while the renovations took place.

He said the council had pressed Network Rail “from the outset” to ensure tenants were treated fairly and that Brixton retained its unique character and diverse range of independent shops.

He said that the council had pushed for “stepped rents” and agreement on this meant that no business coming back to the arches would pay the 2015 “market rents” for at least seven years.

Network Rail had told him, he said, that threequarters of existing businesses would, or intended to, return to the arches.

“While the council cannot get directly involved in the landlord/tenant relationship, we have worked hard to make sure that Brixton doesn’t lose the diverse mix of independent shops and cafés that help make it such a special place,” said the councillor.

“We have put and will continue to put considerable pressure on Network Rail to offer the best deal possible, to minimise disruption and to support businesses during this difficult time.”

He said things “could have been done differently and better” on all sides.

Network Rail, which was asked for and provided a comment when this post was first published, later said that the Arches traders “have not been denied an alternative venue”.

The company said it was “under no obligation” to offer any temporary accommodation while refurbishment work is undertaken.

“However,” it went on, “to support our tenants, many of whom have made a longstanding commitment to the local community, Network Rail has always said that it would assist those tenants choosing to return to the arches after refurbishment with help in finding temporary relocation premises, if they wished to consider this.

“The services of an independent agent were offered free of charge to all tenants and remain available. We also invited expressions of interest in temporary accommodation at Valentia Place [in Brixton] as a possibility if suitable and available and approximately six tenants expressed an interest in this option.

“Valentia Place is limited by the fact that there are few vacant arches and, of those, planning, viability and ownership issues means that, sadly, they are unlikely to be available; however, if we had been able to proceed, these would have included running water.”

A spokesman said it was untrue that Network Rail had told tenants that they could, instead, relocate to Croydon with no consideration of their personal circumstances.

“As we are unable to progress the offer of temporary accommodation in Valentia Place,” said the company, “we have been meeting regularly with those tenants who have expressed an interest in temporary relocation there to discuss a number of other options.

“These include temporary relocation and storage opportunities in Brixton, the surrounding area and, if appropriate, temporary accommodation closer to a tenant’s home. In some cases this is Croydon.

“Interested tenants have been given all of these options and we continue to discuss these with them, in order to find the best solution in each case, tailored to their preference.

“Some tenants have expressly asked us to include options away from Brixton.

“We are pleased that the majority of our tenants have committed to returning to a refurbished unit. This does not represent social cleansing but a real commitment to ensuring that existing tenants are able to return.”

Network Rail said the proposed stepped rental increases over seven years meant that returning tenants would not be paying rents at a market rate before 2024.

Rents currently averaged £21 per square foot and average future rents would be stepped as follows:

Network Rail said some existing tenants’ rents had not been reviewed for several years.

“The actual increase multiple will vary from tenant to tenant, so those who have had more recent rent agreements will have a lower multiple than a tenant who has enjoyed lower than average rents.

“All tenants have been given details of their individual compensation offers and stepped rents based on returning to their original arch.

“It is incorrect to suggest that rents will be increasing across the board by 300%.”

This post was edited on 23 June to reflect comments made by Network Rail after it first appeared.