Lambeth council’s Future Brixton planning team has revealed its two finalists in the competition for organisations to take over and run the former ice rink site, in Popes Road, for two to four years.

Both the bids, which will use converted shipping containers, will rely on private investment to fund the ‘meanwhile’ projects, despite the council initially offering up to £85,000 of seed funding for the plans.

The two schemes, called Grow Brixton and Brixton Toolbox, plan to transform the empty site and will make money from outlets. Both schemes would use some of the profits made from the eateries and bars to fund social good, including apprenticeships, training and an outdoor public space. Both plans will be presented to the public at a meeting at Meanwhile at Number 6 building, Somerleyton Road, tomorrow evening from 6.30pm until 8.30pm.

See outlines of the two plans below, and catch more details at the council’s Future Brixton website. 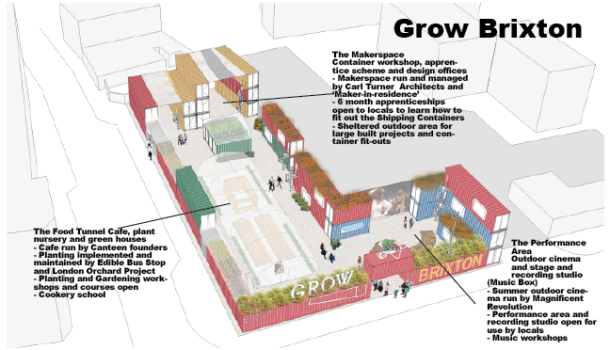 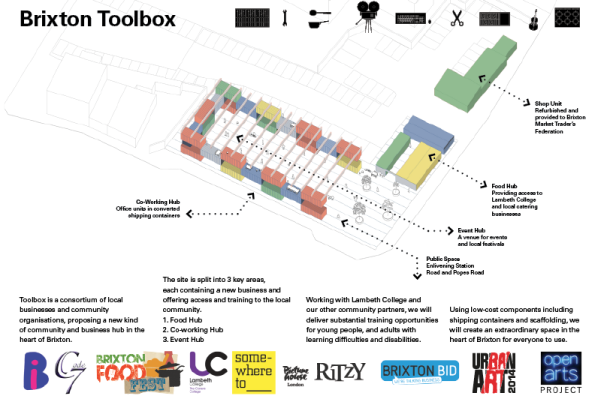 Lambeth council teamed up with the Brixton Market Traders’ Federation for the “meanwhile” contest. While they have organised two public events, one for young people on April 2 and the second in Somerleyton Road, Future Brixton told Brixton Blog that the public say had no weight in their scoring system.

SAVE OUR SHOPS: Cllr Jack Hopkins statement on arches eviction