People occupying the Carnegie library in Herne Hill are becoming a focus for other groups campaigning against austerity policies.

They have been visited by striking junior hospital doctors from nearby King’s College hospital, backed by the residents of the Cressingham Gardens estate who are fighting its demolition and supported by students campaigning on cuts and fees.

And they have the support of the community and its traders. The award-winning Olley’s fish and chip restaurant delivered a hot supper for them on Wednesday.

The Carnegie and the Minet library in Myatt’s Fields, two of the ten libraries run by Lambeth council, are to be leased to the council’s leisure provider, GLL, a social enterprise company, and converted into “healthy living centres” with gym equipment and a book area without trained library staff. “Town centre” libraries, like Brixton’s Tate Library on Windrush Square, are not affected.

GLL runs, among many other things, Brixton Rec and a luxury spa in the West End where protesters demonstrated this week.

Today (8 April) a court will hear Lambeth council’s application for an interim possession order for the library.

Win or lose, said the occupiers, at 1pm today there will be a celebration outside the library. “Whatever the court’s verdict, we will celebrate our success, and share the wonderful food we have been given with the local community.”

Tomorrow (Saturday 9 April) demonstrators will gather outside the Carnegie at 11.30am to march to Brixton via the Minet library in Myatt’s Fields – which was also closed on 31 March. They expect to reach Windrush Square at about 1pm. 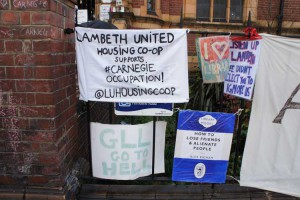 “We have issues in common with many Lambeth residents suffering from the give-away of public assets to commercial firms, the demolition of people’s homes and the loss of much-loved local landmarks in favour of expensive flats for wealthy outsiders,” said the occupiers.

“We are tired, but buoyed up by the support of hundreds of people from all over Lambeth and beyond.”

Some of the many were a group of Liverpool supporters in Dortmund, Germany, for a Europa football league quarter final match, who had a banner backing the occupiers.

Local team Dulwich Hamlet will also display a banner at their match tomorrow.

As well as local support, there is a growing tide of support from the arts around the country. It has been encouraged by local writers Stella Duffy and Toby Litt, who set out on Wednesday to collect 110 signatures backing the occupation – one for every year the Carnegie has served the community.

They had to shut off the deluge the next day at 220 signatories.

“Each day,” say the occupiers, “there has been a continuous pot-luck of entertainers on the library steps: poets, singers, artists, musicians, comedians, performers and choirs. St Saviour’s, the nearest church, sent two guitarists to lead a sing-song.”

Messages of support have come in from all over the world, including Canada, France, USA, Tanzania and Switzerland.

Despite all this, say the campaigners, Lambeth council is unmoved. The council has hit back in the war of words, with a statement that poses the Carnegie which, the council says, received only 2 per cent of library visits in the borough (a figure contested by campaigners) against its legal obligation in the face of massive and unprecedented cuts in central government funding to support the weakest and most vulnerable people.

A spokesman said: “Despite our financial challenge, we are one of the few areas of the country that has found a way to maintain a library service in all our current locations.

“Residents in every part of the borough will still have access to dedicated librarians, our extensive stock of books and resources, the Lambeth archives and space to work.”

Brixton windmill in line for £360,000 to fund new education centre

Town hall sees New Year in with a face lift, a...