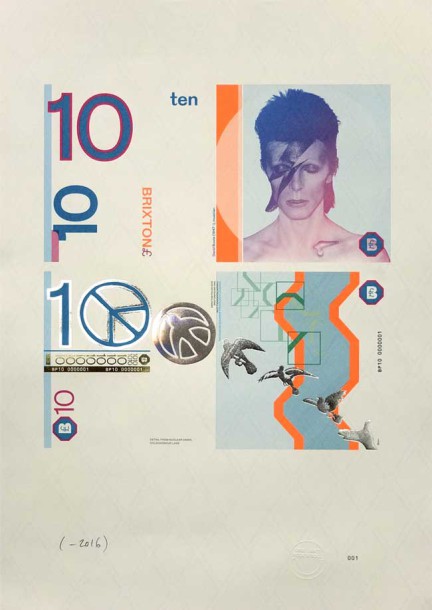 Bidding for a piece of Bowie memorabilia being auctioned by Brixton Pound has already gone over £1,000.

The auction is for a limited edition A3 print of its famous £10 note featuring David Bowie. The print (numbered #001) is published by This Ain’t Rock’n’Roll, who originally designed the award-winning note.

The famous face on the Brixton tenner, goes under the hammer at online auction houses Paddle8. The lucky bidder wins the first of a 300 limited edition  print run. All proceeds go to the Brixton Fund, the Pound’s community grant scheme.

The auction is live at online auction house Paddle8, as part of their Legendary sale.

The edition of 300 – of which 250 will eventually be offered for sale – went into production in December 2015, with David Bowie’s approval. 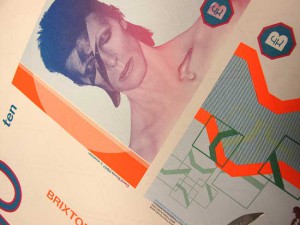 The A3 print is produced on the same diamond-patterned security paper as the circulation notes, and features several of their original features such as orange fluorescent ink and die-cut metallic & holographic foiling.

Both sides of the note are displayed, featuring David Bowie in his Ziggy Stardust guise from the cover of Aladdin Sane, as well as a detail from the Nuclear Dawn mural on Brixton’s Coldharbour Lane.

The print is titled ( –2016 ) in pencil, numbered in both black and metallic ink, and blind-stamped by the designers. The print will also be accompanied by a certificate of authenticity from the Brixton Pound. 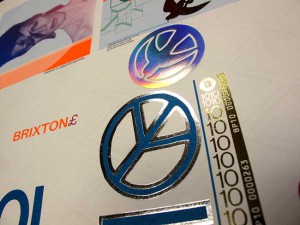 B£ note designer Charlie at This Ain’t Rock’n’Roll said: “The print looks absolutely stunning. The fluorescent ink leaps off the page and the foiling has been die-cut to incredible detail. It really has been produced to an incredibly high standard.

“We’re quite emotional about it. The Aladdin Sane cover image has always been melancholy, but to see it now in conjunction with the ascending dove from Nuclear Dawn is incredibly poignant. We got Bowie’s permission to use the image for this print in December. It’s as if it’s his parting gift to Brixton.”

The auction will be live until 31 March.

Brixton Pound want you to Move Your Money!