Local residents took the reigns in deciding how £7,500 from the Brixton Fund would be shared amongst nine shortlisted community projects.

Chickpeas played a prominent part in the nights proceedings. After listening to the pitches of each community project at their respective stalls, attendees were given ten chickpeas each to use as votes. They could allocate a maximum of five votes to any one project.  The project with the highest number of chickpeas would be guaranteed the maximum amount of funding asked for. The remaining projects received funding in proportion to their share of the vote.

Whilst the chickpeas were counted, attendees heard from previous winners of the Brixton Fund grant.

Ciaran Thapar co-founder of Hero’s Journey, a discussion group for teenage boys said of the funding he received in November “It enabled us to create a sustainable way of connecting with out local community via weekly meetings, now that we have a bit of momentum we can start taking participants out and about London.”

Later, local experts in community activism and enterprise led a panel discussion. Panelists and attendees agreed the need to broaden the appeal of local activism alongside calling for greater collaboration between different community projects. The question of who to include in the definition of the ‘community’ in light of the competing and changing demographics brought about by gentrification was also debated. 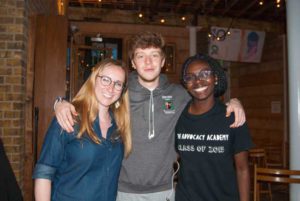 With all chickpeas counted The Advocacy Academy’s 4-day residential programme for young leaders emerged as the night’s biggest winner, securing £2000.  Founder Amelia Viney, 28 said:  “We are not just about helping the kids that we work with, we are about helping them to change their communities, and that is a double benefit.

“Activism isn’t put on the curriculum as it’s seen as highly risky.  The establishment is terrified of empowering young people. They see young people, as totally auxiliary. There is an assumption that the young are worried about feeding themselves, buying a house and so why would they care about making political change? It’s patronising and unfounded. I can’t tell you how much young people understand and want to be making those changes.”

James, 23, a mortgage broker from Herne Hill, who won the highly-coveted limited edition David Bowie Brixton Pound print in the raffle said it would be framed and given to his mum, a huge Bowie fan.

As the event drew to a close, Lambeth Cllr Donatus Anyanwu, lead member for community relations said: “Tonight has been fantastic, it’s a good example of how communities can avoid long-winded applications to external bodies that don’t know the area. Tonight was about communities themselves making funding decisions and rewarding organisations based on local need.”

The Brixton Fund is now looking for locals to join the Fund Panel who will assess applications to the next Brixton Fund grants session.