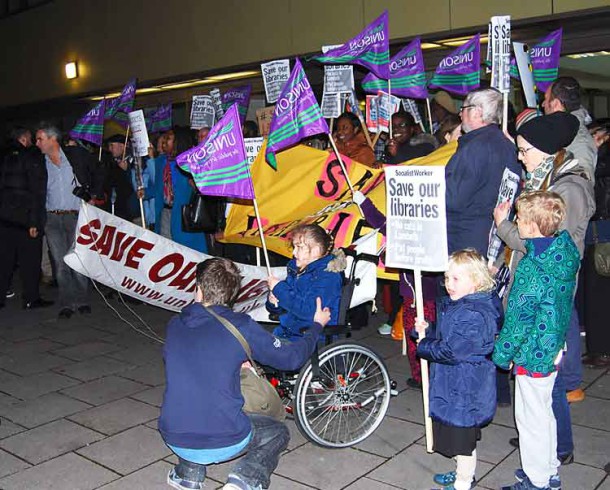 The Lambeth branch of the trade union Unison is to ballot all its members in the borough to discover if they would be willing to strike over the council’s plans for its libraries.

The union is also planning further days of strike action by library staff in March. A strike on 8 February shut every library in the borough.

Unison accused the council of pushing ahead with its closure plans before announcing its attitude to alternative plans drawn up by the head of its own library service.

Unison said that if strike action spread across the entire workforce, housing, benefits, children’s and adult services would be affected.

It said its members were angry at council plans to decommission five libraries, turning three of the five, Minet, Carnegie and Tate South Lambeth, into gyms run by GLL, the council’s leisure provider.

Unison accused the council of unnecessary delay in responding to proposals by the head of the library service, Susanna Barnes, while details of a tendering process for the Waterloo Library building had emerged.

Lambeth Unison joint branch secretary Jon Rogers said: “Unison hopes very much that Lambeth council will see sense and that, instead of escalating industrial action, we can resolve our dispute and pull together to campaign in the mayoral and Greater London Authority elections.”

In a message to his Lambeth members, Rogers said the union’s branch committee believed that if the council could defeat the well supported campaign of its members in libraries – who are the most strongly organised group of council workers – “that will pose a great threat to all our jobs and conditions”.

He said that even though hundreds of staff would be taking voluntary redundancy and leaving the council, it was refusing to guarantee that there would be no compulsory redundancies.

“A positive result in the forthcoming consultative ballot will send a strong message to the council that they should be doing more to assure the job security of all Council workers,” said Rogers.