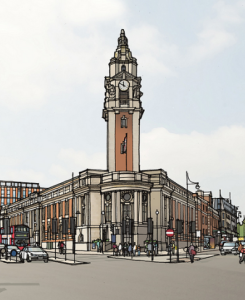 The planning applications for Your New Town Hall are set to be approved next week.

At Lambeth council’s planning applications committee on Tuesday September 1, planning officers will be recommending that permission to be granted for Your New Town Hall “subject to any direction that may be received following referral to the Mayor of London.”

Muse Developments Ltd, the property developer in charge of the project submitted the applications and, if approved, work could start before the end of the year.

The council says the project will save at least £4.5 million a year, improve customer experiences and open up the town hall for “community use and enterprise”.

Part of Town Hall parade will be replaced with a new civic centre and Grade II listed Lambeth Town Hall will be renovated.

194 homes will be created as part of the project, 78 of which will be “affordable housing”.

Cllr Paul McGlone said: “The needs of our residents, rather than politicians or council officers are driving this project. It is a smart deal for Lambeth.” 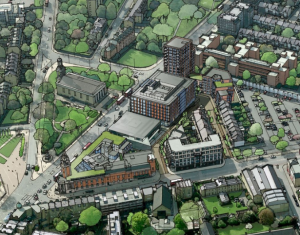 However, concerns have been raised about the plans.

English Heritage (now Historic England) said it broadly welcomes the council’s “aspirations” but added that “the proposals are located within a sensitive area containing many heritage assets and we do have concerns about key aspects of the application, specifically: the impacts of the proposed new tall building; the loss of the existing buildings at nos. 1-6 Town Hall Parade and the impact of the proposed new Civic Offices.

“We have identified that the proposals in their current form would result in harm to heritage assets including the loss of buildings that make a contribution to the special character of the conservation area….In these circumstances Historic England cannot support the proposals at present”.

You can read the full application here.