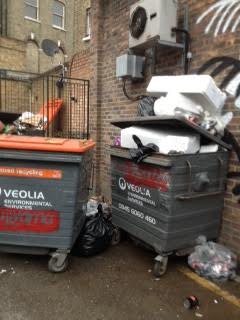 Lambeth council is to get tough on envirocrime – including spitting, dog fouling, litter and flytipping, the No. 1 concern on the doorsteps, according to Cllr Jennifer Brathwaite, cabinet member for environment.

From next month, enforcement officers in uniform from NSL Ltd will fine offenders up to £80 on the spot for offences like public urination.

The get-tough scheme is planned to pay for itself through the fines levied.

The council issued nearly 3,000 penalty notices last year. More than half were for littering, while 500 related to illegal waste dumping.

There were 142 for unlicensed street trading, nine for urination, five for spitting and 11 as a result of the ban on legal highs.

The borough also has the first working system allowing police to use the council’s CCTV system remotely. According to the council, this has aided the arrest and prosecution of people involved in a drive-by shooting and a series of sexual assaults.

It also has introduced a borough-wide Business Crime Reduction Partnership – a membership scheme that includes access to a web-based information-sharing platform and a business radio network so traders can alert each other to issues of concern.

But the Lambeth Green Party pointed out that the council has not issued a single fixed penalty notice since plans were announced to clamp down on engine idling by motorists in May last year.

Green Party Councillor Scott Ainslie said: “This is just the latest example of a lukewarm Lambeth council scheme that fails to make any substantial difference to air quality in Lambeth, following ongoing inaction over cleaning up its own vehicle fleet.”