Last month I went along to the launch party for new local label Laid Bare Records. The evening featured a headlining performance from Chris Belson, whose EP Moon Songs is the first release for the label. The EP’s five tracks present the full range of Chris’ astonishingly resonant vocals and interesting lyrical themes. 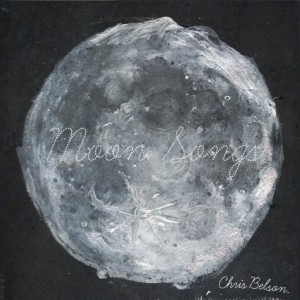 Moon Songs begins with a beautifully melancholic refection on time passing. ‘Children’ opens with gently swaying guitar strumming as Chris sooths the listener with his soft yet deep tones. Despite a comforting vibe within the melody, the lyrics tear at the heartstrings, describing the sadness and loneliness left behind by growing children. As the song draws to its close the reverberation and harmonies build on the underlying sense of loss.

The second track gives a much lighter mood, with Chris using more of his falsetto tones. With an upbeat rhythm and celestial themes, we see the planets aligning and then colliding – providing a suitable allegory for everyone’s confusion when trying to make sense of the universe we’re in.

‘Come to the Window’ has much more of a love song feel to it – with the incredible bass tones of Chris’ vocals being used to their fullest. The repetition of the lover’s plea in the chorus ‘Come, come, come to the window’ gives a truly haunting, almost sinister undertone to this slightly dark yet beautifully passionate song.

I really enjoy the changing dynamic of this CD. ‘Dogs Howling at the Moon’ as a stand alone track gives us another song of loneliness and lost love, but within the context of the record its lilting rhythm and elevated melody it feels almost uplifting. The lyrical imagery reinforces this, as the lover is reassured that the howling dogs portend a reunion.

The final track ‘Without You Again’ uses loss as its main theme again – drawing on symbols from nature as metaphorical representations of the deep pain of loneliness. This is a very stripped down song and it is the simplicity of its instrumental arrangements that gives it such a raw beauty, allowing Chris’ vocals to carry the melody and mesmerise the listener.

Having heard Chris Belson’s voice and style compared to Elvis Presley, Tom Waits, Leonard Cohen and Johnny Cash, among others, I do hear aspects all of these artists in his work, but at the same time there is something very individual and new in Chris’ music. Lyrically he brings something quite unexpected to his song themes, and there is something in the melodies and harmonies that stay with the listener long after the songs have finished.

Congratulations to Rami Radi and Laid Bare Records on such a talented choice for their first release. You can bag yourself a copy of Moon Songs on iTunes or Bandcamp.

Laid Bare have also just announced plans for their next recorded project. William Poyer will be releasing his debut album ‘Born Lucky’ on the label in April.