Lambeth friends of libraries groups met outside the council’s Olive Morris House on Brixton Hill for a Christmas protest against the councils’s plans for its libraries.

They were joined by members of the Older People’s Knitting Group, who brought knitted Christmas decorations. The group meets and exhibits at Tate South Lambeth library, where it also teaches young people how to knit, and is one of dozens of community groups who fear for their future once three of Lambeth’s ten libraries are leased to the council’s leisure provider GLL to transform into gyms with an unstaffed books section.

Members of the trade union Unison, whose librarian members’ jobs are under threat, also took part.

Laura Swaffield of Friends of Lambeth Libraries said: “Borough-wide hostility is as strong as ever against Lambeth’s crazy plan to wreck five of its ten well-used libraries – and waste millions on installing unwanted gyms.

“Lambeth is worse than Scrooge. At least Scrooge guarded his money well.
But Lambeth’s crazy plan to destroy libraries would actually cost more than saving them.”

No councillors came out to engage with the protest or receive the knitted presents, but  campaigners belted out Christmas carols nonetheless, in beautiful harmony, encouraging passers-by to join in.

The council is expected to examine a proposal by its service manager for libraries,  Susanna Barnes, which she put forward in April. It would see Lambeth libraries run by a staff and volunteers “mutual”. The plan us designed to keep all ten libraries open with sufficient staff while achieving the cuts required by the council’s budget.

The council has been accused of ignoring this proposal, but agreed to fund its development at a recent cabinet meeting.

The concern of groups like the Older People’s Knitting Club is that the cutting of funding and of staff from the libraries and the inclusion of gyms run by GLL will put an end to knitting classes and other social groups run by volunteers, due to the lack of space.

Volunteers donate their time to these tasks, and the prospect of  a longer journey to the Durning Library in Kennington rather than Tate South Lambeth could be enough to put them off running these classes.

Tate South Lambeth library is unique in the country for its services for visually impaired readers, again run by a volunteer, and these classes would also be cut in the event of the gym plans going through.

With the amount of protest – at local and national level – over the plans and the consultation, Lambeth council is under pressure to change the plans and ensure all ten libraries stay open and fully functioning.

Find out more about the campaign on http://defendthe10-lambeth.org.uk/ 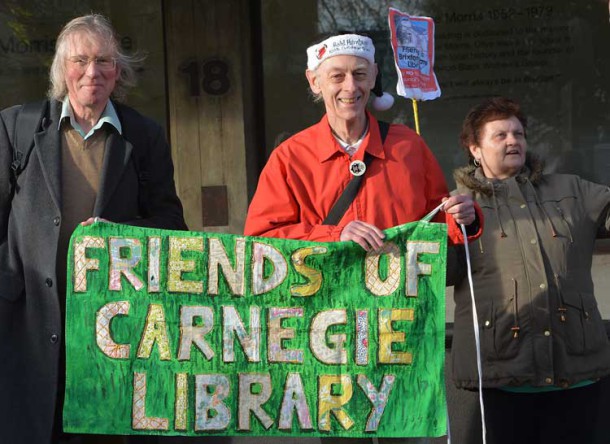