Brixton rapper and activist Potent Whisper is no stranger to taking on world issues – he uses his rhymes to confront pressing political and social issues.

In his latest video, a spoken word piece, Potent takes on the global impact of the fashion industry and its damaging effects on the environment. He has teamed up with the textiles charity TRAID for their #Secondhandfirst campaign to get people sourcing more of their clothes from second-hand sources – such as the TRAID charity shop in Brixton.

“The fashion industry is connected to, and has tremendous bearing on, the lives of so many people around the world, and contributes heavily to many of the problems that we are faced with today,” says Potent.

“I was astounded when I learned that I could make such a huge difference in the world by making one simple decision about my clothes – putting second-hand first.”

He got involved in the campaign in 2014 after releasing a video, Changing Room, which explored ethics in fashion – how big brands operate and exploitation and death among the 60 million who work in the industry.

“I was invited to perform the piece at a demonstration and there I met Maria Chenoweth-Casey, the CEO of TRAID. I started to learn more about the Second-Hand First campaign, and more about the industry in an environmental context. I realised that my small fashion choices have a huge effect on the planet, and I felt inspired to write about it.”

And the buyer benefits too. “Second-hand clothes are so inexpensive,” says Potent.

“There are endless bargains on quality clothes and access to high-end products that you might not be able to afford otherwise. There’s always something new to discover. You could go into the same TRAID shop every day and find something different.

And, of course, there are environmental benefits: “You’re saving money; and saving the world”. To get started with Second Hand First, says Potent: “Just think ‘swap, crop, or charity shop’.”

Crop: when the clothes that you love get roughed up a bit, mend them.

Charity shop: buy clothes at a charity shop to get a first-class closet for a second-hand cost.

The epitome of style himself, Potent tells people worried abut their look: “The next time you pass a charity shop, pop in and see for yourself. Thank me later.”

I ask: “Is it really possible to change the world with a change of clothes?” Potent’s reply: ”I’d love your readers to watch the campaign video, consider the argument I put forward, and tweet me their answers!”

Potent Whisper is releasing new material with “an incredible electric harpist”, Maria-Christina. “Our debut single Now! is due very soon,” he says. “I’ve also written and produced a new short film, an urban romance delivered in sign language, which is due early 2016.” And, of course, he is keeping up his work with the Our Brixton anti-gentrification campaign. 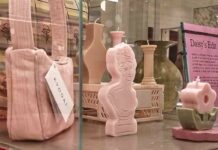 COMMENT: Potent Whisper asks “is this the type of change we...