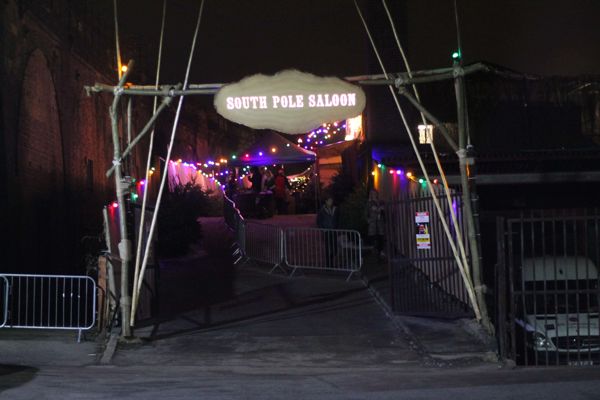 Here in Brixton we have a fun game we like to play when we’re walking around our neighbourhood. Many of you will be familiar with it, even if you live elsewhere in London – it’s called ‘Try To Spot An Open Space That Somehow Hasn’t Been Turned Into Either Luxury Flats Or A Street Food Market’. Keen players of the game will have been kicking themselves recently, for having failed to spot that the rooftop of the long running shop Home ‘n’ Fashion on Pope’s Road was – far from merely a structure for ensuring the retailer’s stock didn’t get wet – also the perfect location for a winter themed pop-up night food market. Before 2017 has finished we fully expect to also witness a high-spec two bedroom apartment in each of the disused public toilets in Windrush Square, and a stall selling pork steamed buns on top of the Blenheim Gardens bus stop shelter.

South Pole Saloon (for that is its name) isn’t here to just tick off one hot trend, though. It’s here to tick off as many as possible! So sure, it’s a pop up, and it’s selling street food at night, but it’s also got immersive theatre! Warm cocktails! Staff with beards! Readers of ES Magazine will be flooding in!

Let’s look at the food first, because what’s on offer is probably why you’ll want to visit South Pole Saloon. And there’s good reasons to do so – nobody could deny it’s good news to have food vendors like Dip & Flip Burger on board, not least because it means you don’t have to go to the company’s permanent locations in the middle of nowhere (ie: Battersea or Wimbledon) to try their solid 8/10 burger & gravy concept. 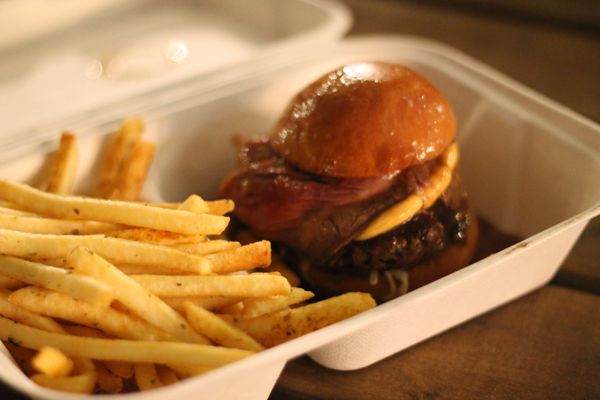 Drinks wise, well, that could be argued to be more an area of concern. Pints of beer – exclusively supplied by Brooklyn Brewery – start at £5.40. Just to add some context, that’s 90p more expensive than the cheapest pint when watching The Who, Taylor Swift and Blur play British Summer Time in Hyde Park this year. South Pole Saloon doesn’t shy away from promoting its own entertainment offering of course – more on that shortly – but even the most optimistic bar manager is going to have a struggle on their hands to match the level of entertainment provided by Tay Tay and Roger bloody Daltrey.

Amongst the lengthy licensing documents  that South Pole Saloon submitted to Lambeth Council back in September, the company said that they anticipated their customers will be from “all parts of London and of mixed backgrounds”. A harsh critic might suggest that at £5:40 a drink their customer base won’t so much be from ‘all parts of London’ as ‘pretty much exclusively from Clapham’, a theory we’re certainly not ready to dismiss based on their opening night. Still, at one point we do spot two women getting around this thorny pricing issue by making use of their own hipflask. For your £5:40 you could afford this fetching little hard liquor container and then just make your own alcohol arrangements. 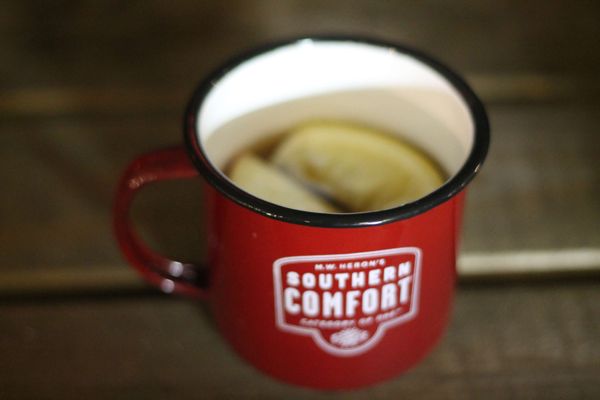 Still, the whole place looks okay, in a grown-up Winter Wonderland kind of way. There’s enough heaters to stop you getting cold. It seems like a passable place to come if you want an evening of dancing, and it doesn’t lay the whole Christmas thing on too thick. There’s other places you can go for Christmas schmaltz. South Pole Saloon wants to where Santa’s slightly naughtier elves hang out.

Which brings us to the Saloon’s theatrical offerings. Pretty excitingly, the website promises the venue will have “every corner designed to cater for the whims of the most fantastical, playful and debaucherous guests”, which would make for a somewhat ambitious way of describing the opening night. We can confirm that there are some young adults on stage dancing vaguely sexily. As for these promised ‘immersive performance’ elements, well, we briefly spot a woman in a costume walking on the bar, and a guy in a costume sit down next to some girls and sing them a song with his guitar. It would all probably hold up as a decent evening’s entertainment in Derby or somewhere. I think what we’re basically trying to say here is: we don’t think you should go to South Pole Saloon on the basis of their much-promoted theatrical offering.

Should you inexplicably find yourself in the mood for socialising outside this December, the Berlin-style surroundings of Brixton Bloc is both cooler and cheaper, whilst Pop Brixton is both a stronger food destination and a better thought out space. And both of them are one hell of a lot more community focused than this place.

Mark Muldoon tweets and Instagrams all the fun Brixton – and London in general – stuff here  and here respectively.

The Jerk & Beyond festival, “a three-day Caribbean taste sensation” kicks off on Friday 8 July at Oval Space in East London. There will be...