Our Brixton is planning “direct action” at Brixton Rec tomorrow (Saturday 6 November) when Network Rail mounts a “drop-In consultation” there.

The campaign group has organised flash raves and sleep-ins at Foxtons and Tescos on Brixton Hill in recent months.

It said: “Historically, local community ‘consultations’ of this nature have proved to be nothing more than empty gestures/publicity exercises.

“The shop-keepers of the Brixton Arches invite you to join them on Saturday, in making our voices heard.”

The protesters plan to meet at the Rec at 1pm.

Network Rail has announced that it is going ahead with its plans for the refurbishment of the arches.

They will mean the eviction of tenants in the arches bounded by Atlantic Road, Brixton Station Road and Pope’s Road while the work takes place. Once completed, businesses will face large rent increases.

Network Rail will submit a planning application to Lambeth council in December and ahead of this is mounting a “drop-in” consultation exhibition for the local community at Brixton Rec today (Friday 6 November) from 3pm to 7pm and on Saturday 7 November from 10am to 2pm.

Jose Cardoso, owner of A&C Continental Deli which closed in October, told Brixtonblog that tenants have been informed that on their return rent will increase by 25 per cent in the first few years, then by 100 per cent, then will eventually triple.

Most of the current business owners, many of whom have come together to form the Save Brixton Arches campaign, have said they will not be able to afford the increased rents.

According to Network Rail, arches closer to Brixton Road will command a premium rent while those further along Atlantic Road and Brixton Station Road will have a lower rent. Tenants have apparently been offered compensation and “relocation support”.

Network Rail says it will be looking to attract “a good mix of businesses” which will “maintain the area as a popular visitor destination and serve the local community’s needs”. It says it wants “to enhance the arches, not change them”. 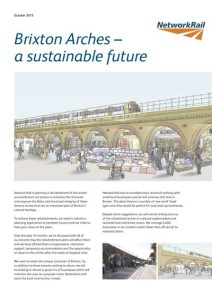 In a leaflet sent to local residents outlining its plans, the company said that, despite some suggestions, it will not be renting out any of the refurbished arches to national supermarkets or food and drinks chains.

Refurbishment will apparently take a year and will include reconfiguring the arches’ layout and redesigning the frontages.

The Save Brixton Arches campaign had pushed for phasing of the work to relieve some of the pressure on the affected businesses, but this has been rejected.

Tom Shakhli from Brixton Pound – which has moved into A&C Deli’s former arches premises – urged Network Rail to act responsibly. “Network Rail needs to appreciate its role as a major landowner and the impact it can have on communities,” he said. “You risk causing community havoc. I would like it to consider the implications of that and be guided by that as much as getting the best monetary value for itself.”

Network Rail’s computer generated images to accompany its consultation appear, intriguingly, to show a pedestrianised Atlantic Road. Does the company know something that the rest of Brixton doesn’t?