Brixton Bloc has taken over Thrayle House, which used to be a centre of gang and drug-dealing activity, and a focal point of the London riots of 2011 and is now a symbol of the regeneration of Brixton.

Thrayle House, planned to be demolished in February, will be replaced with privately developed flats. The regeneration project, including 20-storey and nine-storey high buildings, will cost a total of £200 million; Thrayle House will be the last block to be knocked down.

The block of boarded-up flats is now a lit, decorated space with a festival feeling, a canvas for renowned street artists, and a forum for meetings and debates about the transformation Brixton is going through. 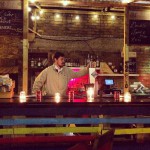 Wesley Evans, a long-standing resident of Brixton, opened Brixton Bloc in August. Wesley worked for a housing association for years, setting up community events in the very space which now houses an open air bar and lounge under a huge marquee.

After the demolition was announced in November last year, the remaining forty families were moved out. Wesley realised the potential of the deserted space. He wrote to the housing association, proposing take it over and create a focal point for the community.

Wesley says former residents of the estate have visited and were pleased at how the estate has been  put to use as it awaits demolition. “People in Brixton are very supportive; they think it’s great.”  Wesley and his team aim to make the venue a positive space in which to discuss the changes occurring in Brixton. The marquee wouldn’t look out of place in a Devon village fair, and this is exactly Wesley’s aim. He says “Brixton does have that village feel; a village in the middle of the big city.”

His commitment to the area and its people is clear: “I left my job to do this.” 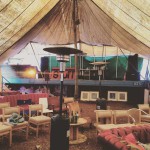 “We’re just trying to show that there’s a middle ground between the terrible effects of gentrification, and the bad estates as shown in recent media coverage of Brixton.”

The odd furniture in the marquee is all donated locally. Wesley made the film screen from gaffer tape, a shower curtain and some wood.

“Most of the stuff you see here has been built or put back into use. The bar’s been made from upcycled wood pallets. We want to make the most of what we’ve got – we’re living in such a throw-away culture.”

Paintings on the marquee walls are donated by locals – and Wesley. Local children made and painted a large wooden fish – representing Mash’s fishmongers whose business is being threatened by plans for the Arches.

How long will Brixton Bloc remain there? “It’s in the council’s hands. We don’t know when it might be whipped out from under our feet.” 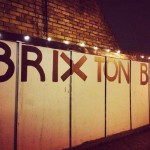 Wesley hopes that by showing what the space can do to foster collaborative community spirit, they can convince the council that Brixton Bloc should continue in another location once the demolition goes ahead.

“There’s such a big artistic community to be celebrated.” Solo One’s vibrant work transforms the previously uninviting walls. Lovepusher’s trademark 3D graffiti has taken over one wall – less of a mural than a visual journey. Street artists from Hong Kong and Spain also grace the walls of Brixton Bloc, and more original works are yet to be unveiled.

“My philosophy is that I want people to walk out feeling better than they did when they walked in,” says Wesley. With such a show of local creativity and resourcefulness, in a space whose past and future are equally ambiguous, Wesley is carving out an area in which Brixton’s happy, inclusive philosophy can take physical form.

Join the  event or find out more.