As the debate rages over the future of Brixton, Helen Reid examines the background to a redevelopment scheme that hopes to avoid both the downside of gentrification and the isolation and neglect of communities like Angell Town

Somerleyton Road, the historic hub of the Caribbean and Irish communities in Brixton, is on the cusp of great changes.

The planning application for the redevelopment of the Somerleyton Road area of Brixton was recently submitted by the council in an important milestone for a project that has been in the making for seven years.

Brixton Green, a not-for-profit community benefit society, was set up in May 2008 specifically to ensure that local people were at the forefront of the redevelopment of Somerleyton Road.

More than 1,200 people are members. It took them five years of lobbying, until November 2013, to convince Lambeth Council to develop the site in partnership with the community.

One of the main criticisms of Angell Town, and a reason cited for gang activity there, is its structure as an “inward-facing island” disconnected from the rest of Brixton.

The same is true of the Somerleyton Road area. The main access point is through Somerleyton Passage, into an isolated group of residences dwarfed by the huge Barrier Block complex, erected to stand alongside a major road that was never built.

The new developments would open up houses and activities to the rest of Brixton. The plan includes 303 new homes, a theatre and a chef school, and would see more than £100 million spent on the area.

The Somerleyton Road are has higher unemployment and lower life expectancy than the Lambeth average, and the redevelopment is designed to bring greater employment and training opportunities to it.

The theatre and chef school, in particular, will provide accessible training programmes. Ovalhouse Theatre is heavily involved in the project, and, with its longstanding radical stance, is very concerned with the social impact it will have. 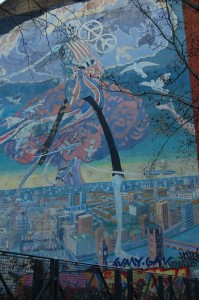 Existing buildings will be demolished with the exception of Carlton Mansions, a historic building bearing Brian Barnes Nuclear Dawn mural, painted in 1981. The new housing will be 100% for rent, a point which Brixton Green fought for.

The area to be redeveloped is owned by Lambeth, apart from one fish storage business on Somerleyton Road which will be compulsorily purchased.

Future Brixton – set up to implement Lambeth council’s “masterplan” for the development of the area is also involved.

It said that people moving into the new social rent homes would be taken from the 21,000 on the council’s housing waiting list. A number of extra care home places are earmarked for residents of the 34 sheltered housing apartments at Fitch Court on Effra Road which is also scheduled for redevelopment. The letting policy for the new homes was still to be agreed at the time of writing.

Brad Carroll is director and a co-founder of Brixton Green. He is a Lambeth-born resident and the owner of a local residential property business.

He says: “We have pushed for a local lettings policy to help ensure people with a connection to Brixton have priority for the homes; we have also pushed for ‘pepper-potting’ with all homes built to the same specifications, so that homes meant for market rents are the same as those meant for social rent.”

These proposals are in line with the council’s policies and so, he says, are very likely to be accepted. If they are, construction is set to start in November.

Lambeth council said designs for the scheme had been created by “five leading architectural practices working with each other and local people to realise the ambitions of affordable homes, jobs and training, and a chance to build a community for people of all ages”.

Cllr Jack Hopkins, cabinet member for jobs and growth, said: ‘Somerleyton Road is exciting, innovative and genuinely crafted through partnership. It represents a unique opportunity for local people to shape their own community”.

The history of the project has not been without conflict.

Block Workout – recently in the news for its new role in Angell Town –  is part of the redevelopment plans, having secured a spot on the new Somerleyton Road.

Carroll says the trustees of Brixton Green, who are Brixton residents, are keenly aware of the accusations of “social cleansing” often levelled at development in Brixton. He says the Somerleyton project has done all it can to embody the community’s needs and desires.

The ambitions for the project will be tested once planning is validated and construction begins.

Are you a resident living near or on Somerleyton Road?

Are you affected by the redevelopment and do you want to share your opinion?

You can also contribute to the redevelopment debate on the planning application. Go to the council’s planning website and search for the reference 15/05282

A planning consultation exhibition will be at the Black Cultural Archives on:

Next step for £50m Somerleyton plans