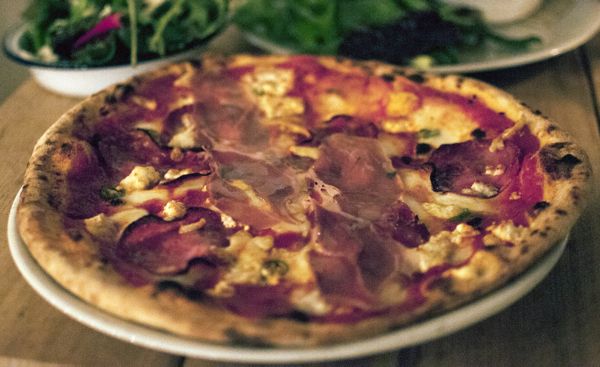 I live with a person who is somewhat of a pizza-fanatic (he’s eating one right now), and so correlatively, I eat a lot of it. In Brixton we’re pretty spoiled for choice when it comes to pizza, with the likes of The Agile Rabbit and Franco Manca in Brixton Village, and Adommé and Bravi Ragazzi just up the road in Streatham. But let’s face it; you can’t have too much pizza.

Newcomer Mamma Dough has moved into the former residence of the Angell pub on Coldharbour Lane. This is the second premises for self-confessed foodies Will and Jake who opened their first restaurant in Honor Oak Park in early 2014. According to Will, they chose this spot because they fell in love with the building and enjoy Brixton’s support for local, independent businesses.

We popped down one Friday night at around eight o’clock and were greeted by smiling, pizza-spinning chefs – good start. We had a short wait for a table – you can make reservations by phone or do as we did and use it as an excuse to have a cocktail down the road. The kitchen is open plan with a huge pizza oven in plain view. It gave good insight to see one of the chefs checking for what Mary Berry would call a soggy bottom, on pizzas fresh from the oven – that’s the kind of attention to detail I like to see.

Seating is a combination of large, picnic-style sharing tables and smaller tables for two. From their simple black-on-white pencil-drawn logo (which I’m sure wasn’t quite as easy to design as I make it sound), to the plywood floor, exposed brick walls and individual hanging filament light bulbs on a rope, Mamma Dough’s vibe is naked-industrial (yes, that’s a thing). It’s got a friendly feel and the level of simplicity you’d pay a lot of money for in central London.

The drinks menu is solid. There’s a decent choice of wines and they also stock a selection of local beers, including some from Peckham-based Brick Brewery, which come highly recommended by the pizza-obsessive.

We picked a starter of burratina to share before our mains arrived. The fresh cream filling oozed out as soon as we cut into the Puglian mozzarella wall and mixed with the generous moat of olive oil. The crunchy rocks of salt and black pepper rounded it off and it came with lovely bread to pile it on top of.

Our pizzas arrived promptly after we’d finished the starter. The pizza-monster went for the Cured Meat which comes topped with tomato, mozzarella, three types of cured meat and chilli, on top of a sourdough base made with Shipton Mill organic rye, wholemeal and white flour. He added goat’s cheese as an extra. The base was the optimum of thin and crispy and the tomato was good enough to make a pasta sauce from. The crust was charred just right and the toppings were firstly, generous and secondly, well-sourced. Delicious meats slathered on top of yummy sourdough; this was a very good pizza and… drum roll please… absolutely as good as its brothers in other Brixton pizzerias.

With the aim of really testing these guys, I thought I’d try their gluten-free option. Fact: I’ve never had a good gluten-free pizza in a restaurant. Mamma Dough’s menu says they offer their pizzas “served on cannellini beans baked in the oven”. I had (wrongly) assumed they would crush cannellini beans into a base, as you would with cauliflower. I was wrong, and what arrived was a rustic looking enamel dish filled with a bed of whole baked cannellini beans topped with all the pizza ingredients. Genius! I admire that they’ve accepted that gluten free pizzas are insanely difficult to pull off at home, let alone in a busy kitchen. These bases are prepared in advance, frozen and cooked to order. I take my hat off to these guys for coming up with a simple and intelligent alternative. 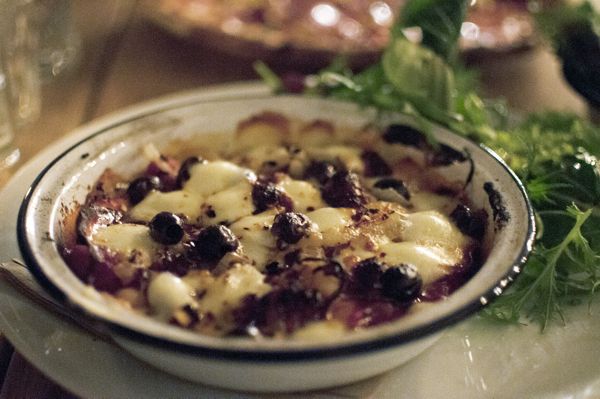 I had the Devil topping consisting of tomato base, mozzarella, spianata, onions, nduja, dry chilli and the unusual but welcome addition of black olives. It was delicious – so much so that I’d actually consider ordering it instead of a pizza again. We ordered a salad too which was super-fresh, though it could have been pointed out that salad is served with the beans.

I’m delighted to have a new pizza option in town, though we were divided on opinion as to whether it beats its rival neighbours. Either way, it’s a very close call and in my opinion, the jury’s still out on who makes the best pizza in Brixton. Did somebody say competition? Call me when you need a judge.

The Brixton Exchange: A day of discussion about Brixton past, present...

Six arrested in crack down on gangs and drugs in Brixton

12 March, 2015
We use cookies to ensure that we give you the best experience on our website. If you continue to use this site we will assume that you are happy with it.OKPrivacy policy