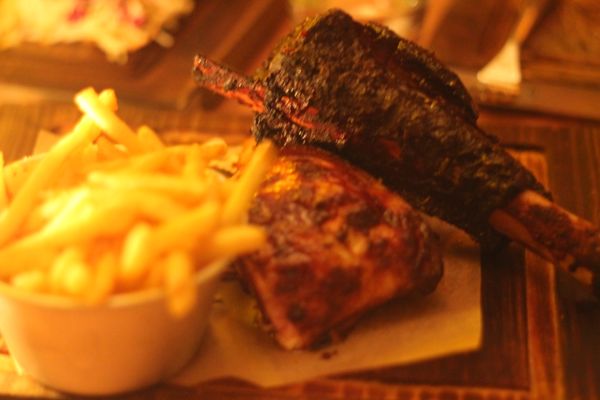 Heard of the Columbo Group? They’re the new Antic in town. Heard of neither Antic or The Columbo Group? Oh, sorry. Well, maybe you’d be forgiven for having not. Antic are that big company that own all those young cool bars in our area that many people seem to mistake for being independents: Dogstar, Effra Social, Gremio De Brixton and Eckovision.

The Columbo Group, meanwhile? They’re the new boy in our neighbourhood. We’re intrigued by their arrival. We’d been re-thinking our long running romance with Antic for a while now, and now this young, flashy new boy has arrived in town. We somehow got chatting to them on the N109 home last month, and we must admit they did catch our eye a little bit…

Long story short, we somehow gave The Columbo Group our phone number as we got off the bus that night, and before long they were eagerly chirpsing us, with the successful launch of Phonox nightclub last month. Now, with Blues Kitchen, we’re at the ‘exchanging graphic Snapchats’ stage of our relationship. The first two branches of The Blues Kitchen are in Camden and Shoreditch. A suspicious eye might spot a pattern with these previous partners: this is clearly an organisation interested in our area for our ‘coolness capital’. You sense that if we blurted something wildly unhipster out on the third date – something like how we wished Ritzy cinema would hurry up and fully convert to a Cineworld – then The Columbo Group would be off running down the road and hopping into bed with Tooting before we’d even had a chance to suggest going shopping for matching knitwear.

If this all feels a little more corporate than your ideal vision of Brixton, then you may have to force a smile for some time yet: alongside the Blues Kitchen and Phonox, we also had the opening of the Brazilian chain Cabana last month, and next weekend it’s the opening of Caribbean chain Turtle Bay (with a whopping £800,000 investment in the branch). Seemingly, we’ve hit a new era of corporate investment in Brixton. Is it because rents are now too high for independents? Is the most a local business can hope for now a six month stint in Pop Brixton?

Best to put all that out of our minds right now, as we’ve got a romantic dinner date with The Columbo Group to get to. And we have to admit, Blues Kitchen know how to treat a neighbourhood like us to a good date. For starters, they make a great first impression. They’ve put money and thought into doing up the former (independent venue) Electric Social.

Meat cuts, barbecuing and marinating across the board are excellent. You can gnaw away at, say, the pork spare ribs for what feels like an eternity. If the beef brisket isn’t quite as good as the astonishing 10/10 effort from street food favourite Smokestak, it does just about manage to be better than the locally available brisket from Miss P’s BBQ at Pop Brixton.

Hard shakes will instantly win over anybody with a sweet enough tooth to stomach them. Anybody ruling out meat will find their options unsurprisingly thin on the ground. An underthought out vegetarian platter would be entirely lacking in imagination if it wasn’t for the solitary – yet excellent – parmesan and artichoke dip at its centre. The creole bean burger is huge and has clearly had far more care directed towards its inception. And here’s a strong bonus: as standard they’ll offer to pack up your leftovers for you to takeaway.

Visiting during the soft launch period, it was unclear how the live music prospect would fare in comparison. Blues Kitchen Camden has been responsible for some great live music in the past, even on weeknights, but every time we attempted to listen to the live music on our visit it proved itself too immediately ignorable to maintain any attention.

There are arguably bigger problems: the bill includes the standard 12.5% service charge. Taking our money, we told them we’d like to pay £27 each. Against this specific request, they kept all of our change. Due to a last minute round of cocktails we weren’t given a final receipt – being told that the till had already been shut down for the night – and that we’d have to email requesting one. A week later, there’s no sign yet of it showing up.

All of which we hope are teething problems, because based on the food here, and the clubbing at Phonox, we’ve kind of got the hots for The Colombo Group right now. We’re forgiving it some of its flaws for the moment, because of how dependably it pulls off the stuff we’re really looking for in a partner. We’re happy to keep seeing where this one goes…

Mark Muldoon tweets and Instagrams about Brixton and London in general here and here.

The Jerk & Beyond festival, “a three-day Caribbean taste sensation” kicks off on Friday 8 July at Oval Space in East London. There will be...