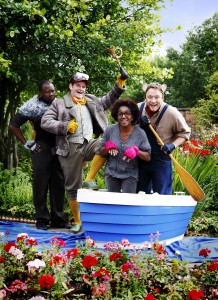 Theatre company, Sixteenfeet Productions are returning to Brockwell Park with their unique brand of open-air theatre. The Walled Garden is to become the stage for  – Wind in the Willows, an evergreen classic by Kenneth Grahame adapted by Andrew Walsh with original music by Guy Holde.

The production is promenade theatre so the audience will be encouraged to explore the beautiful setting in order to watch the story unfold, ably led by a talented cast of actor-musicians. You can catch the show from Saturday 25 July – Sunday 2 August – to book visit www.sixteenfeet.co.uk or call 07958 448690. Tickets are £12 with £8 concessions and discounts available for groups and low income families.

We spoke to local playwright Andy Walsh about re-working a classic story for his neighbours.

Is this the first play you’ve written for a Brixton audience? Where else might we have seen your work?

I’ve been writing with Sixteenfeet Productions for the last five years and Brockwell Park was one of the reasons I moved to Brixton. Wind in the Willows is the first thing I’ve worked on locally. I went along to see  Alice in the Walled Garden and thought the play was wonderful. I got chatting with Caroline the producer afterwards and that led to Wind in the Willows. Since then we’ve staged Wind in the Willows twice and a new play Goldilocks and the Three Endings an interactive performance where the audience’s choices influenced the end of the play. This year’s production is a new, revised script and a new director (Vik Sivalingham) has brought a fresh energy, restaging the play for Brockwell.
Where have I done things before? I’ve been writing or directing, on all sorts of things from theatre to television and videogames  that’s taken me around from Newcastle (Byker Grove), Yorkshire (Emmerdale) and down to London (Family Affairs) before heading off to Persia (Prince of Persia), over to Hogwarts (Harry Potter and the Order of the Phoenix), Legoland (Lego City Undercover) and  Albion (Fable:Legends) and now it’s great to be in Brixton.
What’s it like writing for your Brixton/Herne Hill neighbours?
It’s great! I’ve been coming to the area to see gigs and to meet friends for years so to get the chance to live and work is a real privilege. Lambeth is a great hub for creativity with so much great artists, musicians and creatives.
What’s special about putting on a play outside? What are the challenges of not only being outside, but being in different locations?
Adapting any story from one medium to another is always a challenge and staging it as a promenade piece throws up all sorts of additional things to think about. The venue as a star of the show and each has its own personality. Where there is a path in one place, it’ll be a flowerbed in another. All this means the director has been working with the cast they have had to make sure that staging is flexible enough to work anywhere, so the play fits in as tailormade for each space. Having the audience is in the middle of the action rather than sitting in front of a stage separated from it gives a great energy to the story.
Describe your ideal audience for the play in a sentence!

Families, grown-ups, kids, couples, fans of the book and anyone in Lambeth who loves summer.

£7M parks improvements in Brixton revealed, but council will only pay...