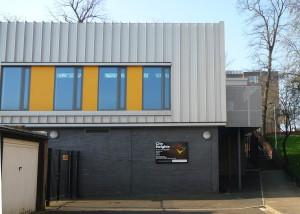 Furious Brixton residents from the St Martins Tenants and Residents Association are due to present a 400-signature petition protesting at the failure to open a youth centre to local people at a meeting of Lambeth council at the town hall on Wednesday evening, July 22.

New sport facilities (right) were built as part of the new City eAct Academy on the St Martins Estate.

The centre, on Maskell Close, Tulse Hill, on a site knownknown locally as “The Dip”, was completed more than two years ago, but local people and community groups still cannot use its facilities.

The association says the new youth centre was promised by Lambeth council, as a much needed resource for the young people of the area, when agreement was reached to build the new secondary school

The academy school opened last September and local schools have been using the centre since then.

“Residents were promised these leisure facilities several years ago,” said Brendan Zecevic, one of the group that hopes to address the council.

“We have seen potential youth clubs fail to materialise for lack of a home, despite there being purpose-made facilities on the estate. I ask Lambeth Council to honour their pledge and make the Dip site available to all.”

Randle Beckford hopes to use to site for a football club.  He said: “I’m setting up a project to teach primary school children to play football.  The teachers will be teenagers, not adults.  The young teachers get to share their skills and gain a recognised Football Association qualification.  Everyone on the project is a volunteer.”

However, Lambeth council said the centre was fully handed over by developers Carillion in mid-June, as significant defects and water damage had to be fixed.

The youth centre is under the management and control of a new Community Interest Company, the 4NS CIC (4th New School, CIC).

Cllr Paul McGlone, Deputy Leader for Finance and Investment, said: “I welcome the community interest in this centre. As we are all aware the academy school opened on the St Martins Estate in September 2014, and schools in the area have been using the facilities since then. “There have been delays in getting wider community access, in part due to water damage to some of the building. But that issue is now resolved and a community meeting is being held on Thursday 30th July where youth activities in the area, including at this centre, will be discussed.“The centre is being run by a community interest company, and they are already working with locals on a programme of activities to bring the new centre into further use.”

Are you experiencing domestic abuse? The Gaia Centre is open