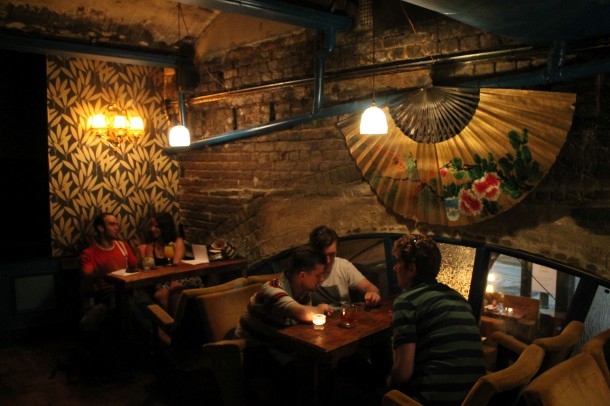 There’s a trendy new bar in Brixton’s arches. You may not exactly need reminding that it’s a sensitive time for the businesses in the area. The #savebrixtonarches campaign is in full swing with Network Rail looking to redevelop the area, then triple the rents it charges retailers. Even Wahaca have been canny enough to put the campaign poster up in their restaurant window. For the last decade or so Network Rail has (if you think about the major ones you use regularly) been on a mission to develop its stations into money-spinning shopping centres with a few train platforms attached.

All of which is fine, if you’re adding a Bella Pasta and a second Marks & Spencer Simply Food to Euston station. It’s arguably somewhat insensitive, however, if it will contribute to the social cleansing of Brixton. Network Rail has defended its plans, pledging to ensure that any new businesses that replace ousted ones will be independently owned. But as has been pointed out, it doesn’t matter how independent they are, as the process still forces out businesses that were there to affordably serve the established Brixton community, and so further erodes people’s ability to maintain their deep-rooted connections with the neighbourhood.

Only too happy to play the bull in the Brixton Arches’ china shop, then, is Eckovision – a new bar that’s opened opposite Argos on Atlantic Road, where Atlantis bar used to be. Eckovision arrives via Antic, the bar company that has the good wisdom to fool you into thinking you’re not drinking in a chain bar, by adopting a different name for each new venue they open. Those not familiar with the umbrella company will surely be familiar with the portfolio : Dogstar, Effra Social and Gremio Brixton are all already local, or you’ll perhaps know them from across the rest of London, from Tooting Tram and Social to Farr’s School of Dancing in Dalston, to Sylvan Post in Forest Hill.

There’s a system, then, to opening an Antic bar: take a property; restore it; keep the same name. Indeed, it’s a system that’s proved impressively unyielding in the past: in 2014 the company opened in a former Job Centre on the historically dilapidated Deptford High Street, and then refused to change the décor or name it had chosen – The Job Centre – in response to fierce public criticism from campaigners who suggested that it was turning the locally widespread experience of being unemployed “into a style feature for the amusement of those with disposable cash.”

Visiting on a Thursday night – the bar’s opening night – we order beer. At £4.50 it seems lightly at the expensive end of the spectrum, until we realise that they’re serving in 2/3rds of a pint measures, which tips the pricing from ‘lightly expensive’ into ‘hastily downloading the Wonga app’. We pop back into the bar 48 hours later on Saturday night to take photos and we bump into the manager – the smaller measures are explained with, “we don’t want to be the kind of place where people get drunk”. Which could be the reason. Or the reason could just be profit maximisation, of course. It can be hard to tell in these situations, but the fact that just 30 seconds after this conversation a customer walked past us carrying a tray of seven Jägerbombs suggests otherwise.

On a similar note, if anyone is seeking nominations in the ‘worst bit of retail signage’ category for fictional Brixton awards, we’ll happily direct you towards the bar’s huge, hideously self-contradictory “Kitchen coming soon… but until then eating’s cheating (but drink responsibly, yeah?)” sign. For anybody who has spent the last decade considering the phrase ‘eating is cheating’ to be an infallible idiot-detector, it doesn’t bode particularly well. 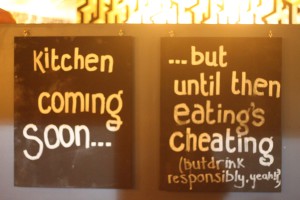 And so you could argue, the Claphamification of Brixton continues. Eckovision is unquestionably a well-designed space to drink in. There can be no doubt that the gin, elderflower, apple and mint cocktail we sample has been thoughtfully executed. But one wonders what other fresh, independent businesses Network Rail has in mind to replace the remainder of our retailers. For now, we’ve got a grim early preview of future Brixton.
Mark Muldoon tweets and Instagrams about Brixton and London in general here and here.

Trump that – Brixton has got its own Nuclear Dawn beer

Called to the Bar: The White Horse, Brixton

24 January, 2015
We use cookies to ensure that we give you the best experience on our website. If you continue to use this site we will assume that you are happy with it.OKPrivacy policy